THE CRATE AS A DEN AND A SAFE PLACE FOR DOGS 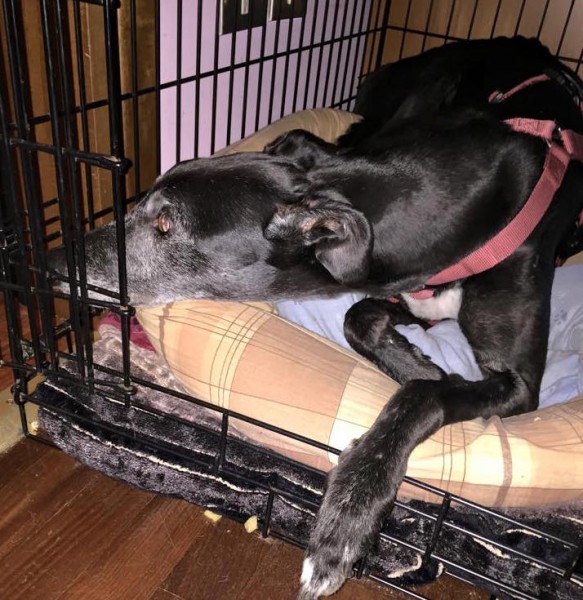 When we suggest to adopters the use of a dog crate to help their greyhound settle in, we are very often met with an attitude of distrust and refusal. The most frequent immediate comments tend to be: “No, poor thing!” or “I can’t shut him in a cage!”.

Actually these emotional reactions, while perfectly understandable, come from not knowing how to introduce the crate to the dog or how emotionally meaningful it can become for him, if introduced properly.

The purpose is exactly the opposite: not to keep the dog ‘shut in’, but to keep the world ‘shut out’. The aim is to offer the dog a den, a safe protected place where he can take refuge at home, in the car, if he is at the home of friends with other dogs or children, or when he is at a restaurant and there is too much confusion.

In fact, a dog needs a den in which he can feel:

A) protected and safe

B) able to look out, so he can keep an eye on everything going on around him, and be able to quickly detect the presence of potential dangers, etc.

The pups of wild canids are born in dens, but domestic dogs – especially those of a primitive type – dig dens very similar to those dug by wolves. If you think about it…our dogs will often dig holes in the garden and then lie in them, or they’ll scratch and dig at the surface of their cushions, or they’ll move the cushions and covers around in order to create a kind of wrap-around nest they can snuggle into and feel safe, calm and protected.

The crate offers a dog a ‘domestic den’, and one that can be brought along during trips or when going out and about with one’s owner. In order for a crate to be a good den, it has to have similar features: it must be closed on three sides, open at the front, and have good visibility for keeping an eye on surroundings. If one uses a transporter, it will definitely be already closed on top and at least partially on three sides. Whereas if one opts for a crate, we would suggest covering at least the roof and part of the three sides with a blanket.

Now for the practical bit…

How can we ensure that our dogs – whether they are puppies or adults – learn to love this ‘protective shell’, and experience the crate as their own den?

And how do we choose the right model?

Let’s look at how to choose the most suitable kind for our dog. The transporter or crate should neither be too large nor too small. The dog should be able to sit down, stand up on 4 legs and turn around. Only in this way will he be able to feel safe and protected when he is in there.

Models where the roof can be removed are preferable, as they’re easier to clean and are more useful during the training period.

Now for the delicate bit…

How can we convince both the dog and ourselves that the crate is a safe place, a den where he can relax, chill out and feel protected from the world

One needs to progress by degrees by applying rigorously a whole series of steps, each of which should be carried out with calm and patience, allowing the dog all the time he needs and all the right kinds of experiences so he can familiarise himself with the crate, and experience it as a safe place he enjoys going to and staying in.

1. We should try to find a sectional crate, with a removable top part.

2. Before introducing this tool to the dog, he should already be able to associate his blanket strongly with a sense of calm and reassurance. To learn how to get him to experience his blanket and cushion as reassuring places, please read the section on this topic in https://www.petlevrieri.it/en/2013/11/01/working-on-developing-calm/

3. We start by introducing the crate to the dog without the top part, so that it doesn’t look straightaway like a closed narrow place to him.

4. We place the uncovered crate in a safe part of the house, for instance where he normally has his bed, and we position it so that one side leans against the wall.

5. We put his blanket or cushion inside and let him go in there when he feels like it, perhaps to eat a treat we’ve given him.

6. We never force him to go inside the crate, even when it doesn’t have the roof on.

7. We let a few days go by, and we reward the dog every time he goes into the crate by his own free will, maybe just to take a nap.

8. We can make the crate more attractive, by making a little ‘scent path’ of tasty treats that goes from the entrance right up to the far end inside.

9. Always leaving the crate in a safe part of the house and with a blanket inside, we then try putting the roof on and throwing a treat or a kong inside, and letting the dog go in when he feels like it.

10. We would advise a crate that is large enough in relation to the size of the dog so that he can turn around inside and relax stretched out.

11. We should not close the entrance gate straightaway. We should allow the dog to go in and out freely.

12. When we throw food treats inside the crate, we should not follow this action by inviting the dog verbally to go inside. And even less should we try to get him to go inside by pushing him. A verbal invitation or a push – even if light – could cause the dog to become suspicious, and see the treat as a lure to make him do something that might not be in his interests.

13. Without focussing our attention on the crate, we do something else and simply praise him a lot whenever he goes in of his own free will.

14. At this point going in and out of the crate should not be a problem for the dog, to the point that he may choose it as his place for relaxing and chilling out.

15. When he is relaxed inside, we go very calmly to the crate and close the front gate, leaving a treat inside with the dog.

16. If he does not become agitated, after a few minutes we reopen the gate and give him another treat.

17. We repeat this last step of closing the entrance gate while lengthening the times between closing and reopening it.

18. All the steps from 5 to 17 can be repeated with his food bowl, placing it first near the entrance and then later on right inside the crate.

19. While he is eating, we could try closing the entrance gate: he probably won’t even notice. When he has finished eating and looks at us, puzzled, we open the gate and praise him a lot, and reward him with a treat. If we notice that he is getting nervous with the door shut and maybe stops eating, we reopen it and try the closing procedure again the next day.

20. Once all the preceding steps have been well absorbed, we can move the crate to a less secure and familiar place in the home, for instance the car.

21. The important thing is to never give the dog the feeling that he is being conned, and never to skip or rush through any of the stages.

22. We start with the car parked and with the engine switched off.

23. Then parked but with the engine on.

24. Then finally with the engine on and moving for short stretches.

25. If the dog gets agitated when the car starts moving, we can try giving him some treats to nibble on to offload the tension.

26. If we can frequently associate positive emotions and a feeling of safety and protection with the crate, this can help the dog get over any car sickness or stress he may have which is linked to the car.

27. Once the dog trusts us and is confident to go inside a closed container, we can try introducing him to other types of smaller dog transporters, like the ones we are obliged to put our dogs in on ships and aeroplanes. A place like a transporter/crate is always a narrow thing for a dog, so at first he may find it unpleasant.

But the reason dogs don’t like going in them is not due to their size but can be attributed to two factors:

1. Too much attention placed on the object by the owner.

2. A lack of trust on the part of the dog towards us.

Too much attention paid to the transporter or crate and, we could add, too many expectations loaded with impatience or worry are the reasons why in some cases the dog doesn’t want to go inside it, however comfortable it may be. The owner in fact, enthusiastic about his new purchase, can’t wait to bring it home and get the dog to try it out. If we bring home a gorgeous new bed, we can’t wait to try it out, but the same doesn’t go for the dog. On the contrary, when this new object arrives home, he should not be forced to try it out. All the things we might try (to get him interested), especially if they involve food, will be viewed with suspicion. It is very easy in such cases for food to be seen as a lure. We should reward the dog when he goes in of his own free will.

A good starting point to get the dog to accept the crate is undoubtedly for him to see his blanket or cushion as something he associates with calm and relaxation, whether indoors at home or outside the home.

The dog’s blanket should be a kind of transitional object, like the blanket in the cartoon ‘Peanuts’, which can help him relax in any situation. The dog should also have already played previously with a Kong and be able to appreciate chewing rawhide chews or similar to help him offload in some way any stress.

The most important thing, however, to ensure success in familiarising the dog with the transporter or crate is without a doubt the level of trust that there must be between dog and owner.

The dog must be used to not being tricked or lured through the use of food, and should always be guided by clear and appropriate gestures.