PHYSICAL CONTACT AND STROKING: HOW TO ENSURE IT IS A PLEASANT EXPERIENCE FOR THE DOG.

Due to their history and past experiences, many dogs – and rescued greyhounds are often a good example of this – don’t have a very good physical awareness of their own bodies, and consequently don’t like being handled or stroked.

As far as physical contact in general is concerned, a dog’s body can be subdivided into ‘cold zones’ and ‘hot zones’.

The cold zones generally go from the neck to part of the rear, and from the back to the belly – put simply, the trunk of the body. The hot zones on the other hand include the head, the rear, the tail, the paws, the extremities of the paws such as toes and pads, the abdomen and the groin.

The cold zones can be touched right from the first meeting, albeit while abiding by some basic rules for first approaching a dog.

The hot zones are not exactly off-limits, but it is important to take the appropriate precautions and gain access to them slowly, bit by bit, along with the dog’s trust. They are basically parts of the body that the dog tries to protect, both for anatomical reasons and the memory of painful or traumatic past experiences.

This schematic division of the dog’s body into hot and cold ‘zones’ doesn’t always correspond to reality: it varies from subject to subject, depending on how the dog has experienced handling while growing up, his clinical history, and what sort of traumas he may have undergone. In other words every dog has his own unique body map of hot and cold zones.

In the absence of specific problems, it’s always a good rule of thumb when first touching a dog to begin with the ‘cold zones’, using the back of the hand. The back and the palm of the hand have different meanings for a dog.

If we use the back of the hand the contact is more discreet and less invasive of the dog’s personal space. The back of the hand should be used above all with dogs who appear to be anxious or worried about physical interaction with humans.

If we use the palm of the hand, we should be aware that we are communicating a greater sense of closeness (in other words we are being more invasive). We should only do so once the dog has given us clear signals that he has accepted our presence and our touch.

A bit more specifically, and in the light of what we have written here, we would suggest you approach touching and handling your new greyhound with great care, by degrees, and bearing in mind the distinction between hot and cold ‘zones’, during the whole initial settling in period.

Starting with the non problematic areas, you can use the back of the hand – which is more delicate – and lightly touch him for as long as he doesn’t show any signs of discomfort, gradually turning the hot zones into cold ones. 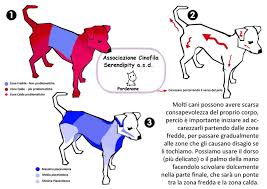 – stand alongside your dog, at a distance which is acceptable to him.

– place your hand on his neck, on the side he offers you, and then lightly stroke him along his side, taking care not to invade the rear and tail areas.

– don’t move your hand too quickly, because in so doing you would’t be rewarding him for calm behaviour but encouraging him to get excited.

– your hand must move slowly, and with a level of pressure on the dog’s body which is relative to his size, following the parallel meridians that go from the corner of the mouth, sideways from the neck, right down to the start of the rear.

– the last part of this stroking process should end more gently, letting your hand slide away with less and less pressure.

The aims here are to try to reduce the problem areas as much as possible while increasing the ‘cold zones’, and to help the dog become more aware of his own body, thus making him feel happier and more self assured. This will also help you in all daily activities and when you need to take the dog to the vet’s or the grooming parlour.

It’s essential to remember that all dogs are unique, in other words one greyhound might love being scratched on the rear while another may prefer being massaged on the neck.

Also, when you touch your dog and handle him in the wrong way, without respecting the rules of contact and his own ‘bodyzones map’, he will let you know by sending you a whole series of signals to express his discomfort and ‘non appreciation’. Often we humans don’t read these correctly, for various reasons, and at this point some dogs may submit to the discomfort, but others may react in various ways.

One of these ways is by growling, which in itself is not a sign of aggression but a warning. It’s as if the dog were telling you: “Now stop bothering me, I’ve already told you in every way I can, that’s enough now.”

Dogs communicate a lot via non verbal means which we are not always able to notice or read correctly, or respond to in the right way. Why? Because it is not always easy to read canine behaviour.

What we would like to suggest, if your dog reacts with a growl to being handled, is to try this: when your dog growls, try to stop and analyse what is happening. What was the dog doing, what were you doing, where were you, in what kind of environment, with whom, with what resources (games, sofa, dog cushion, bed, food, etc), what was your posture like and how far were you from the dog, etc.

Try to understand what could have bothered your dog or made him scared or nervous.

Don’t insist on continuing to do whatever made him growl, it would not be effective and would negatively affect your relationship of trust. It’s as if you had just told someone to stop doing something because it annoyed you, but they continued doing it anyway. The end result would be that it would annoy you even more and would give you a bad impression of the person and the relationship you have with them.

Obviously everything we have written here is intended as a general rule only, to help guide you during the settling in period. All tools and rules need to be interpreted and adapted in relation to each specific dog and each specific adopting family. 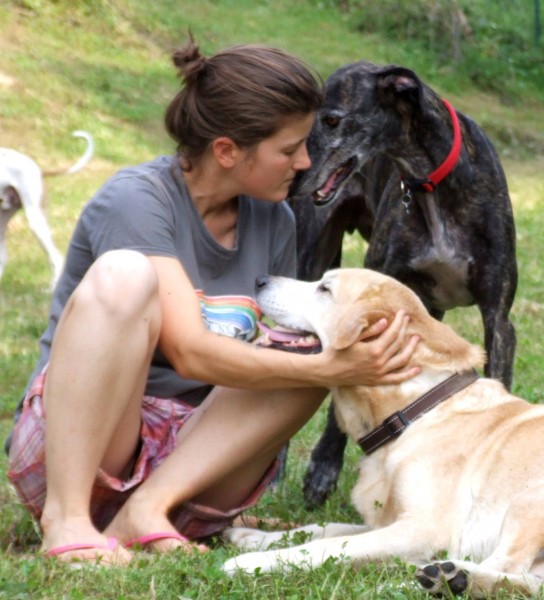