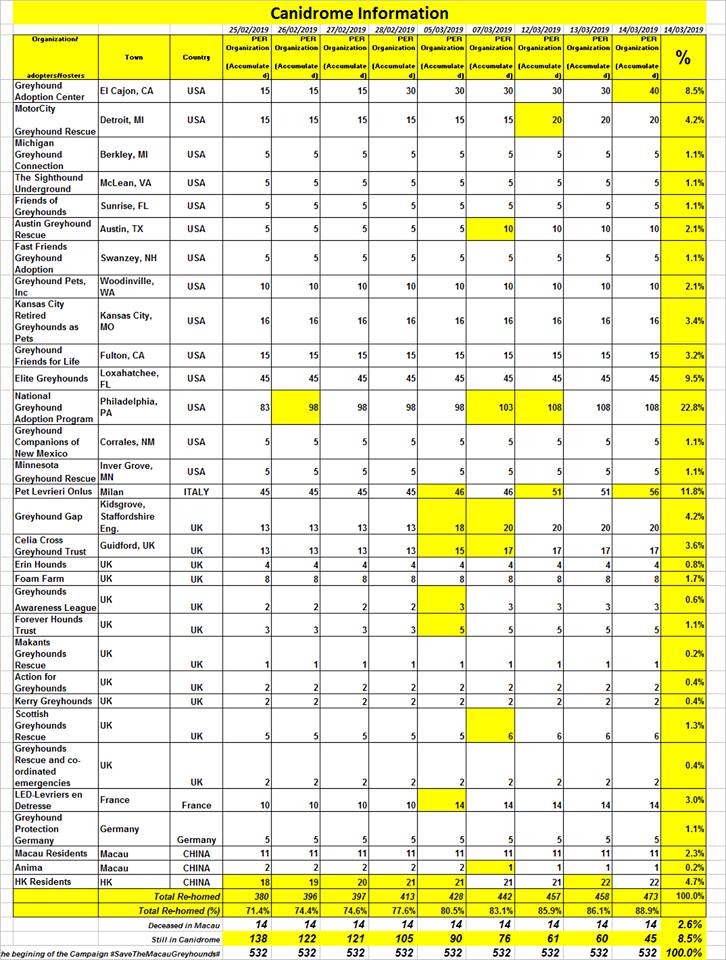 Tomorrow 15 greyhounds will leave Macau at around 4:15 pm, 10 to USA to Greyhound Adoption Center (San Diego) and five to Italy, Milan, to Pet Levrieri Onlus.

My thanks to GREY2K USA, Darren Rigg, Caryn Wood and David Wolf of USA and Stefania Traini, President of Pet Levrieri Onlus of Italy, involved in this shipment.

We will have only 45 (8.5%) greyhounds in Canidrome plus one Canidrome greyhound temporarily recovering in Anima, which means 473 (88.9%) have been re-homed. On 15 March one more greyhound will go to hong Kong!

The last day of greyhounds living in Canidrome will be 21st March, as we expect to be capable to close our file of local fosters to receive greyhounds allocated to our friends in Australia before that day.

I should like to address a special invitation for all our Volunteers to be in Canidrome on 21st March at 15:30 for taking the last joint photos with each grey flying on that day!

Also I should like to thank our partners in Macau, IAM (former IACM) and Yat Yuen for all the support received. I am sure that without IAM in our side we could not do it as fast as we wanted. Anima has been strongly supported by IAM from the first beginning of this campaign!

Thank you President Jose Tavares and all the staff directly involved in this re-homing program. It was not an easy or even straight exercise. Sometimes we have disagreed and happily at the end we have all compromised. Humans are not perfect!

A very special thanks also to Dr. Choi U Fai, the head of the Macau Kennel of IAM who has disclosed in 2011 the real situation of those greyhounds!

My special gratitude goes also to Dr. Connie Kong who has worked very hard with me to establish the International Greyhounds Re-homing Center (fortunately rests the joint cooperation) and has facilitated a good compromise between both Anima and Angela Leong. With her Anima and as so our International Partners were capable to get involved with this International Re-homing Program.

As part of this special arrangement between Anima and Mrs. Angela Leong, Mr. Jose Luis Pedruco Achiam, a very young manager, joint our team to facilitate all this process of communication and compromise between both organizations being a very good helper and strategist and friend of Anima, fair to both organizations but mainly a good supporter of the greyhounds welfare!

Thanks Jose! I really believe that we have learned together a lot!

I can not forget also those friends involved in the Campaign #SaveTheMacauGreyhounds# leader by Anima, GREY2K USA and Pet Levrieri Onlus of Italy! They will have later next week a special thanks by the Organization! I am inviting Stefania Traini, President of Pet Levrieri Onlus to dedicate a special and warm thanks to all involved in this process, making this huge re-homing program a well succeeded international movement, may be the biggest ever happen in history!

My thanks also to Macau Chief Executive Dr. Chui Sai On and all Macau government officials that have supported us, including China Liaison Group in Macau SAR (China), that has received us listening our concerns, former Macau Chief Executive Dr. Edmund Ho, actually Anima Honorary Life President and all Anima staff, members, board members, volunteers, foster families and adopters, local and international friends, reporters as well as all local animal welfare organizations that have helped us!

My last an special thanks also to Dida Caixeiro who had worked hard, very organized and patiently helping solving problems and the strategy that we all here in Macau have agreed in order to make our goals even better and faster!