Programme for the international event for greyhound advocates organised by Pet Levrieri that will be held in Italy on the weekend of the 23rd-24th-25th September. Speakers representing ANIMA Macau, GREY2K USA Worldwide, Caged Northwest, GreytExploitations, the British parliamentary All Party Group for Animal Welfare and Limerick Animal Welfare will be taking part.

9.30 – 9.45: Welcome: Speeches from the president of Pet Levrieri Stefania Traini and from Local Authority representatives.

9.45-10.15: Pre-adoption course for new owners on how to help rescued greyhounds settle into family life: Part One.

10.15-11.45: Speeches by representatives of the international antiracing movement.  Albano Martins, President of ANIMA Macau: “The Macau Canidrome and the Close The Canidrome campaign: past and present situation, and future prospects”.

Christine Dorchak, President and General Counsellor, GREY2K USA Worldwide:  “The fight to end racing in the USA and the international role of GREY2K USA Worldwide”. Marion Fitzggibon, founder and Director of the Irish rescue Limerick Animal Welfare (LAW):  “The Irish antiracing movement and the situation of greyhounds and lurchers in Ireland.”

Michael James, Director of Promotions and public speaker for the British group CAGED North West:  “The aims and achievements of Caged Northwest in the context of the British antiracing grassroots and activist movement, and the situation of racing greyhounds and lurchers in the UK”.

Stefania Traini, President of Pet levrieri:  “The contribution of Pet Levrieri to the Close The Canidrome campaign and the fight to end greyhound racing worldwide”.

11.45-12.15: Handing over ceremony of 20 rescued Irish greyhounds and lurchers to their adoptive and foster families.

14.30 – 17.00: Socialising time for guests, associate members of Pet Levrieri and adopters (and their hounds). 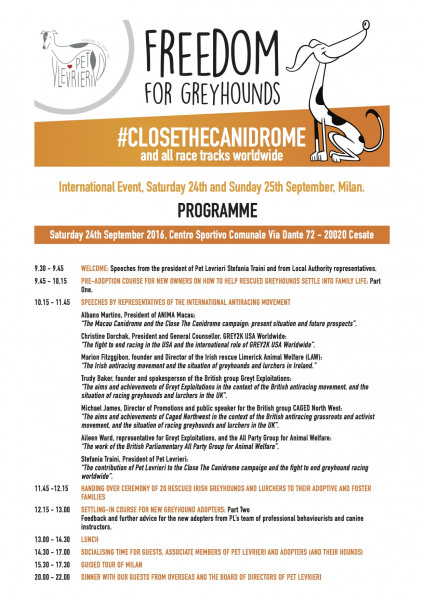