We are pleased and honoured to publish an interview given to Pet Levrieri by Christine A. Dorchak, President and General Counsel GREY2K USA Worldwide.

1) What is ‘coupling’ and what does it have to do with greyhound racing in the US? When did it start and why? In which States is this system used?

The word “coupling” refers to the marriage between live racing and a dog track’s license. In order to offer any type of gambling, a track owner must offer a mandatory schedule of live races, otherwise his or her operating license is voided. The result is that dog tracks across the United States have become casinos with dogs running around in circles with no one watching. As one Florida track owner put it, “The only time there’s a large crowd of people watching dog is when people get up from the poker tables to smoke.”

Just since 2001, the amount of money gambled on live racing has plummeted by 70% and all states with dog racing are losing money because it takes more to regulate the activity than it can produce in tax revenue.

2) GREY2K USA Worldwide is campaigning for decoupling in all the States where it is legal: can you explain to us what decoupling means and why it is important for the greyhounds’ cause?

The truth is clear. Greyhound advocates want to save dogs and greyhound track owners want to save dollars. The solution is the same: to end commercial dog racing. Once the law is changed, and the live racing mandate removed, many track owners will end live racing immediately and others will phase it out over a short time. The humane and economic facts dictate this conclusion.

Additionally, it is because of greyhound racing’s stark unpopularity that we have been able to successfully stop expansion to countries such as Jamaica, the Philippines and South Africa.

The trend is with the greyhounds!

3) What is GREY2K USA Worldwide doing to achieve this end?

GREY2K USA Worldwide is non-profit advocacy organization that lobbies for an end to dog racing.

We are therefore empowered to work in the legislative, judicial and citizens initiative processes to change the law.

Since our formation in 2001, we have helped close nearly three dozen US dog tracks and given thousands of greyhounds the second chance they deserve. Our most recent victory took place in the southwestern state of Arizona, where the legislature voted unanimously in support of our legislative bill to prohibit dog racing.

We were proud to work with the track to reach this happy day and together, we sponsored many of the nearly 500 greyhounds that were released from Tucson Greyhound Park.

4) What consequences could the end of greyhound racing in Florida have in the States where it is still legal?

Florida is truly the heart of dog racing, with more tracks than all other states combined! Greyhound racing was first legalized here in 1931, after its invention in California twelve years before in 1919. When dog racing ends in the Sunshine State, and all its breeding farms close, the entire industry in this country and worldwide will become even more marginalized.

5) What impact could the end of greyhound racing in the whole of the US have on the situation of greyhounds in other countries?

Internationally, for better or worse, the United States has become a leader in business. When the cruel commerce in greyhounds ends here, this should well have a ripple effect across the globe. But now is not the time for wishful thinking or patience!

Change is not self-executing, so everyone who cares about the greyhounds should take action now to help them. Host an outreach table, organize a greyhound walk, raise funds for a rescue group, and please meet with lawmakers if you live in a racing country – there is so much to do and no time to waste. The dogs are waiting!

One good and easy way to start is to sign our petition to the leaders of countries with dog racing.

6) What is the mission of GREY2K Worldwide, beyond the USA?

GREY2K USA Worldwide will keep working until dog racing ends everywhere. That is our goal and we mean to reach it!

Formed in February of 2001, GREY2K USA Worldwide is the largest greyhound protection organization in the United States with more than 100,000 supporters.  As a non-profit organization, the group promotes the adoption of ex-racers and works to pass laws to end the cruelty of dog racing around the world.

A co-founder of GREY2K USA Worldwide, Christine Dorchak has extensive professional experience in the animal protection movement. Before obtaining her law degree, she worked as Research Director for the New England Anti-Vivisection Society and was the manager of the Ellen Gifford Sheltering Home for Cats in Boston.

Christine specializes in pari-mutuel law and has drafted laws to successfully prohibit dog racing in several states and countries.

She has been featured in several national publications including the Huffington Post, American Dog, Fido Friendly and Bostonia and provided commentary pieces for news outlets such as the Miami Herald, Lowell Sun, Chicago Examiner and Lawyer’s Weekly.

A long-distance runner all of her life, she has competed in seven Boston Marathons. Christine enjoys spending free time with her four cats and beloved rescued greyhound, Gina. You may reach here at [email protected] 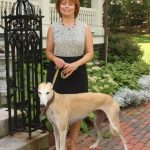 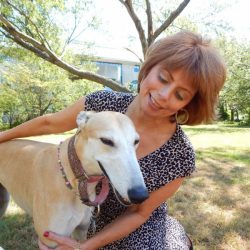