‘Bald thigh’ syndrome in greyhounds: some causes and a natural home treatment

‘Bald thigh syndrome’ (BTS)  is a common problem in racing greyhounds. Different potential causes have been suggested, from genetic predisposition (much like baldness in some men), to a niacin and thiamine deficiency, to a hormonal  imbalance caused by over stimulation of the adrenal glands – typically found in dogs kept in a state of constant ‘chase arousal’ typical of a racing environment. Indeed, according to some trainers, ‘higher attaining’ dogs (in racing terms) are more likely to suffer from hair loss on their thighs and butts than their more laid back kennel mates.

In the case of genetic predisposition, one might assume that even pet greyhounds who have never raced might develop the syndrome at some stage in their lives.

In the case of thiamine and niacin deficiency, this can be explained by low quality or unbalanced nutrition.

In the case of hormonal imbalance, according to some trainers, ‘higher attaining’ dogs (in racing terms) are more likely to suffer from hair loss on their thighs and butts than their more laid back kennel mates.

This is because excessively high levels of adrenal gland stimulation can depress the function of the thyroid gland, and thereby reduce the availability of the thyroid hormone which in turn causes general body hair loss, particularly to the outer surfaces of the thighs, and that is why this particular occurrence and the resulting ‘bald thigh syndrome’ is sometimes blamed on low body thyroid levels. In any case, the best way to determine if there is a thyroid insufficiency is by a veterinary test.

It appears that BTS is not the same as hair loss on other parts of the body caused by other factors such as malnutrition or skin diseases – it seems to be specifically concentrated on the thigh and backside areas. A greyhound with BTS can otherwise appear to be perfectly healthy, with shining coat and normal hair growth elsewhere – if there are bald patches elsewhere and the dog looks generally under the weather, it is probably not BTS.

Sometimes when a greyhound leaves racing, is adopted and starts to live a more relaxed laid back life with high quality nutrition the problem adjusts itself, but just as often it does not, in which case supplementation of the diet with oats can sometimes have very positive results, due to the niacin and thiamine content of oats which not only promote fur regrowth but are also generally beneficial for the nervous system and stress related conditions.

I originally got the idea of using oats as a treatment for BTS from a refuge which used them successfully for treating the greys that came to them with the condition, and so decided to try it out on one of my own recently adopted greys, Erin, who had balding thighs. I was so impressed with how well it worked – her fur regrew completely on both sides in just under 2 months, and the problem never returned – that I shared it with  friends who had the same problem, who also reported good results with it. 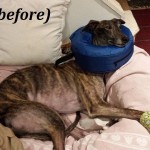 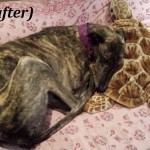 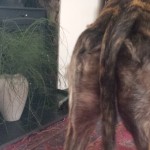 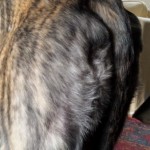 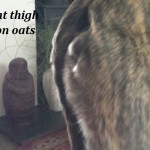 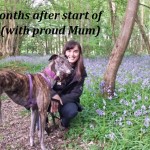 It goes without saying that adding oats is not a substitute for a healthy and well balanced diet, but an extra to address a specific problem, and that a greyhound apparently suffering from bald thigh syndrome should always be checked over first by a veterinarian to exclude any other more serious problems.

Add 1-2 tablespoons (15ml-30ml) of (preferably organic) uncooked porridge oats (slightly moistened with warm water) to breakfast every morning. I also add an optional 1 small teaspoon of organic coldpressed flaxseed oil to the oats to give extra shine to the coat, but the oats are the essential ingredient. If the dog has a tendency to diarrhoea, best to give just half a teaspoon of flaxseed oil or else use cod liver oil instead. The high vit B content and the niacin and thiamin in the oats promote fur growth, but it is essential to stick with it day in day out as it takes approximately 2-3 months. 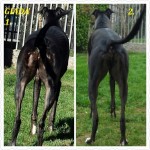 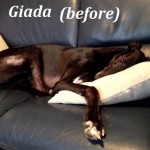 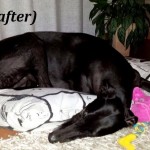 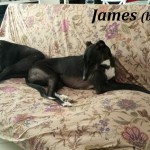 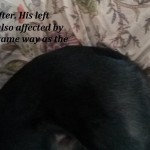 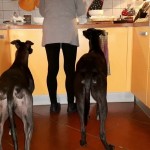 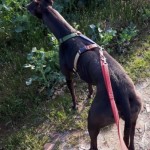