THE DARK WORLD OF GREYHOUND RACING

The dark world of greyhound racing

Behind a sprint, under the eyes of fans, a dark universe, made of doping and electric shocks is hidden. The more greyhound racing in Portugal increases, the more concerning about greyhound abuse grows.
Once they are “retired” they are abandoned or killed, despite their price: a sprinter imported from Ireland can cost even 30000 euros.
Joao Fernandes, a businessman, adopted Tomè through a group of animal right activists, who had found the hound abandoned and emaciated in the area of Familicao. The former owner forgot to remove the microchip from the neck of the poor dog. Quite weird: it’s usually the first thing they do before getting rid of the dogs. For that reason it was very easy to find him and to ask him all the documents, so that Joao could be able to proceed with the adoption.
Unfortunately the galguero (that’s how trainers are called in Portugal and Spain) took Tomè back. The result was a war that lasted for ages. Joao says: “ He wanted the dog back just to put him down”. He felt in need to threaten the trainer: he had to send Tomè’s documents to him, otherwise he would denounce him for animal abandon. After five months, finally the business found Tomè’s ID documents in his own mail box! In
In Joao’s mansion in Dafundo (Oeiras), from a big garden, here comes Tomè wagging his tail and jumping. It’s hard to believe to Joao’s words, looking at that greyhound now laying on a carpet with his new friend, a mastiff named Rufus.

“When he arrived, Tomè couldn’t sleep, he cried like a baby with nightmares for about six months. Then he started to be shy and he was always hiding in his corner. It took him ten months to become sweet and obedient”.

This is Joao’s advice for adopting an abandoned greyhound:
“Be very patient to let them adapt to the new environment and the new owners”.
Tomè was imported from Ireland from the Familicao galguero, his coat is damaged, almost bald, on his paws. It means he was forced to train with a very popular instrument among galgueros, made of spinning steel posts with electricity: if the dog cannot keep the rhythm, it gets an electric shock. 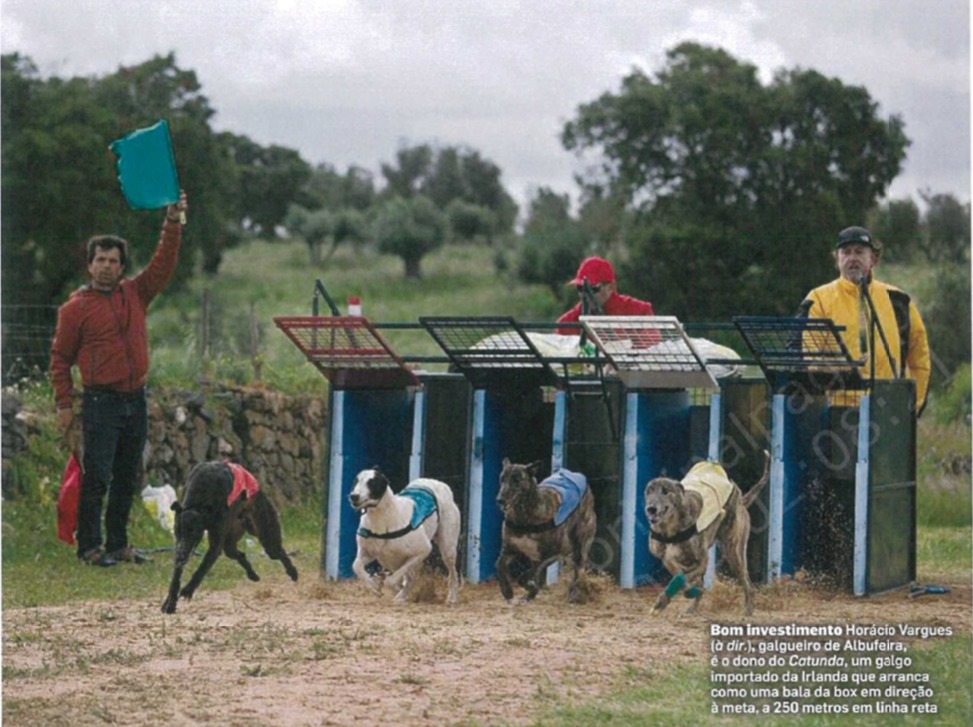 In UK and Ireland betting companies earn up to 300 millions of Euros a year, while greyhound industry more or less 1,9 million of Euros.
GREYHOUND IDENTIKIT
Six facts about the symbol of four legged – elegance
– Ancient times: it seems to be the most ancient dog breed ever existed, or at least the only one mentioned in the Bible
– Universality: it’s the only dog breed that can donate blood to all the other breeds. That’s one of the reasons why hounds are so expensive in the industry
– Speed: after cheetah, it is the second fastest four legged animal. Greyhounds can reach 72 kmh speed
– Behavior: it is such a noble and obedient breed, calm, sweet, shy, silent and clean but also very smart
– Longevity: if well kept, a greyhound can live from 12 to 14 years – Body: the wight can reach 32 kilos and the hight 76cm 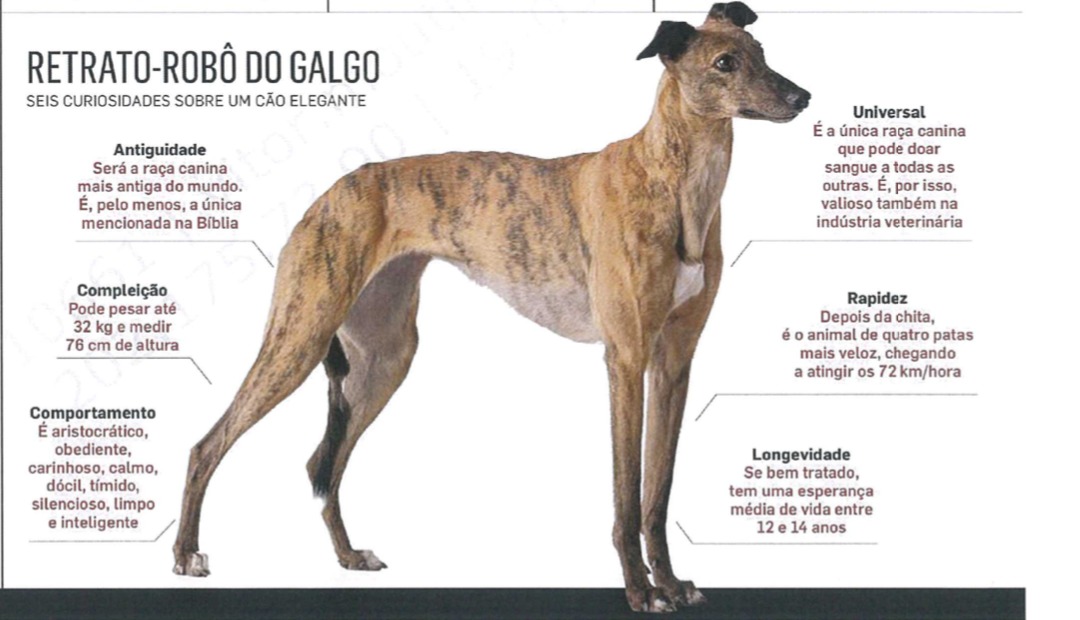 A DAY IN RACING
The 56 years old tauromachy knight Joao Moura, known as the most famous greyhound breeder of the Country, found himself in a very happy Sunday in May during a race in his own territory, in Monforte, in the district of Portoalegre.
That day he wasn’t thinking about betting and well known problems with the revenue.
Joao’s passion for these dogs started in 2010, when he won the Spanish National Hound Championship, with his dog Alheira. 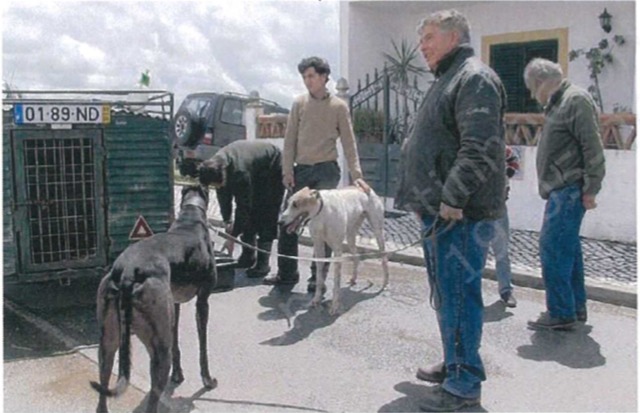 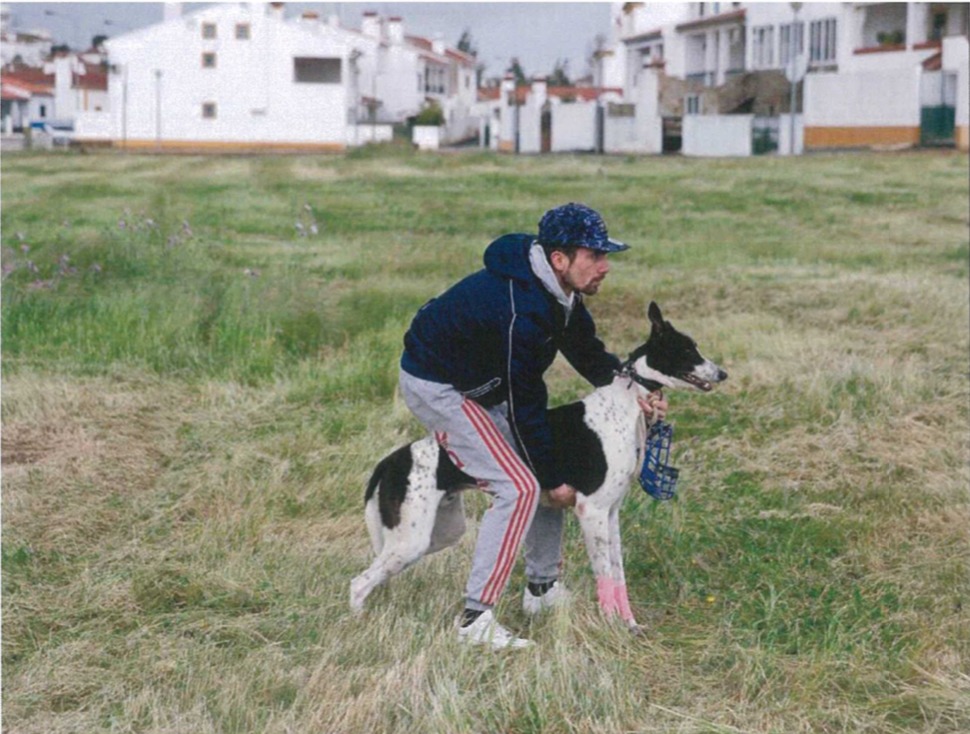 GREYHOUNDS AND MONEY
The president of Monforte Chamber, Gonçalo Lagem, defends galgueiros:
“Every breed has a different indolo. Greyhounds are born to run and galgueiros are put under attack with no reason. Nobody can love a dog as much as who use them, so you have to use rationality”.
Legem believes that racing is part of the culture and the environment, plus it brings people to restaurants and hotels.
The same reasoning is shared by his colleague and president of the Camera alentejana of Cuba, Joao Portugues, elected as well from CDU (a federation of political parties from extreme left-wing in Portugal). Last September he launched a new municipal track for greyhound racing.
Althought, the most of Portuguese galgueiros live in the Nort if the Country, they are about 600 and there’s were two/three races a week take place.
A single dog imported from Ireland can cost up to 5000 Euros, but if his DNA has the genes of a big champion, then the cost can rise up to 30000 Euros.
Many dogs come from Spain as well and some breeders have dozens of them each. Food (a 20 kilos bag cost 70 Euros), cares, maintenance of the equipment and travels to competition sites are very expensive, so galgueiros spend thousand of Euros every month.
But in Monforte the only money you can see is the 10 Euros fee to subscribe to the South galgueiros association and the 12,5 Euros fee for those who are not associated.
Barbara Moreira, a galgueira, wrote a polemic post on her blog Vidas, suggesting that all greyhounds races should be considered as any other sport that admits betting. She didn’t reply to our questions about her statement. 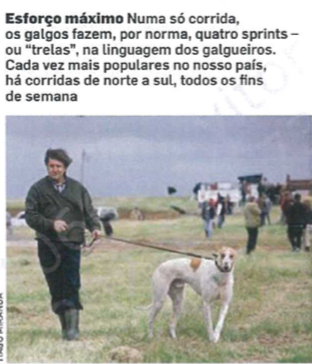 In UK and Northern Ireland greyhound industry invoices 1,9 millions of Euros a year, while betting companies in 2014 earned 300 millions of Euros in both countries with greyhound racing. In the meantime the number of scandals increases: in July 2006 the Sunday Times reported that in the last 15 years ten thousand healthy dogs were killed with guns and buried in Seaham gardens, in England, just because they were not useful anymore to their trainers.
In 2014 a BBC investigation for Panorama magazine, thanks to hidden cameras, proved the bond between doping on greyhounds and bets. At the beginning of this year in Spain the greyhound championship risked to be canceled because DNA tests proved that two greyhounds attending the competition were born from a big champion’s sperm that had been stolen.
Unfortunately in the closest Country the real problem are the 150000 dogs abandoned or killed every year, says Harry Eckman, president of Change for Animals Foundation. Another issue highlighted by the activist has been the need to control the import/ export from Ireland and UK to Spain and Portugal. Most of these dogs are suspected of being illegally transported without the essential documents. Just a few days ago 24 greyhounds ready for boarding were stopped in Manchester airport and didn’t reach Macao for lack of documentation. Last week a few Irish activists launched a global campaign asking Lufthansa to refuse to transport those animals to Macao, where every month 30 deaths on tracks are registered.

CRIME OR ENTERTAINMENT?
In Ireland and UK greyhound run until they are 4 or 5 years old, while in Portugal not more than 2 years: they are already so “overused” that they are forced to retire. That’s one of the main reasons to which activists hold on to to end greyhound racing.
“When the dogs are 3-4 months old they start their daily training and when they are 5 months old they start using the mechanical equipment for training. “Some of them are left behind for bones fractures and left abandoned or put down” – says an activist. Doping leads the dogs to problems for kidneys, heart, skin, teeth and in the 98% of the cases psychological problems. The biggest challenge indeed is adoption: “People who want to adopt must have a lot of free time and good financials to follow the long path of adapting and rehab, that usually last more than a year”. Pipa, who was abandoned in Antelejo, was no different. She arrived at the Pereira’s, in a big house in Camarate, Lisboa. Her front left leg was injured and it was not possible to fix it. Judite Pereira, 49 years old, and her daugheter Susanna, 27 years old, understand from Pipa’s mood when it’s time to give her pain killers. Here she lives with 32 dogs and 15 cats.” 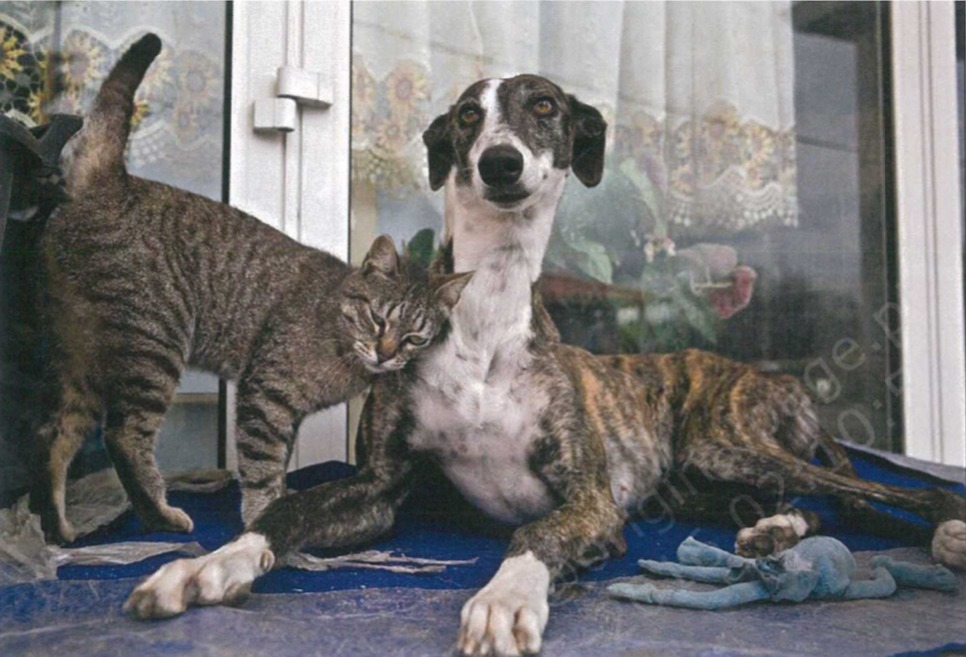 For those who wonder why authorities don’t take measures for that, the deputy from PAN (People Animals Nature) Andrè Silva answers:
“Our legislation doesn’t provide laws about it”. Animal abuse is not considered in this case because greyhound racing is labeled as entertainment.
“This is a typical example that shows how important is to expand the law to animals who are not considered as pets. What PAN asks is a law capable of controlling and solving this dark and perverse situation”. 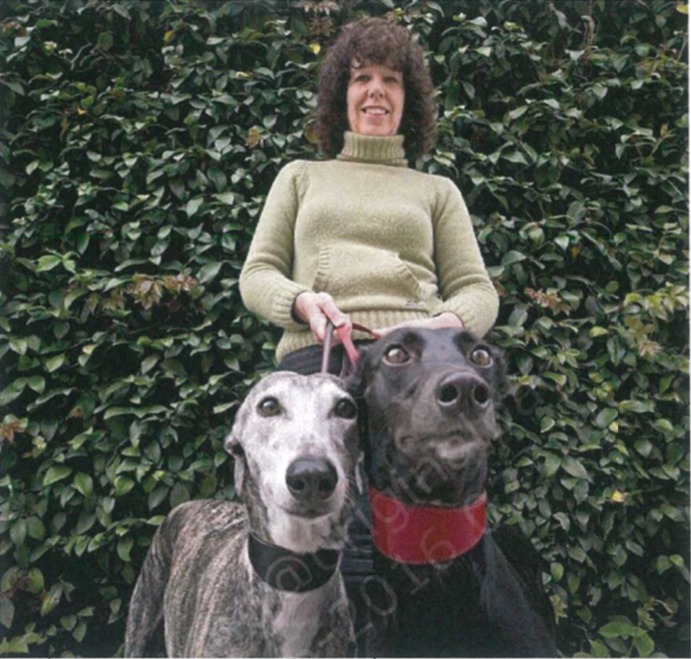 We met Maria Ramalho, 53 years old, she introduced us her two greyhounds, Xira and Noa, rescued and re-educated, and she brought us a copy of one of the most famous paintings of Amadeo de Souza-Cardoso (1887-1918), called Os Galgos, the greyhounds, dated 1911. 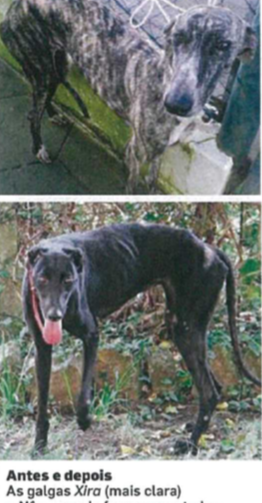 She still remembers the day she saw on the web the pic of a hound in such a bad state, abandoned in Villa Franca de Xira kennel, but ready for adoption. After one hour she couldn’t stop thinking about that dog, she re-opened that notice and she decided to rush to Villa Franca. When she went back, shoe found herself with a sad, skinny and stinky dog: once at home, she washed her, fed her and she claims that when the dog was eating it seemed like she was crying. She thought: “Can dogs cry?”. Initially she wanted to foster the dog and to give her in adoption, she even put her on a special website. But the morning after, she had already changed her mind. They were meant to be together and she called her Xira. Two years ago Maria met another greyhound vagabonding in Montemor-o Novo. She was pregnant but when she was brought to the local kennel she had a miscarriage. Maria immediately adopted her and called her Noa. Xira and Noa now live happily together. But this is just one happy ending story.
For 25 years a trainer had been known for shooting the dogs down whenever they lost a competition in front of the public, torturing them in front of the people, shocked, but silent.
@Petlevrieri
original article :
/www.petlevrieri.it/wp-content/uploads/2019/08/Visão-19-05-2016-Greyhounds-in-Portugal 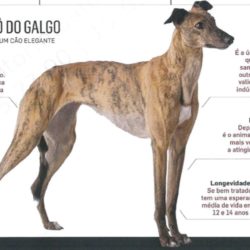 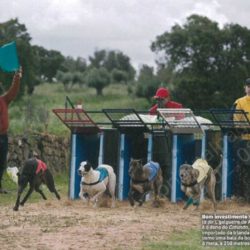 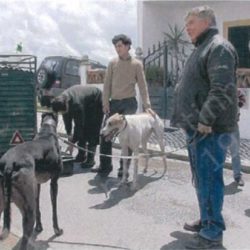 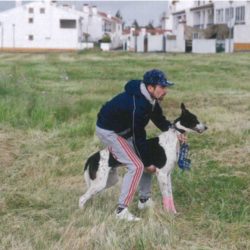 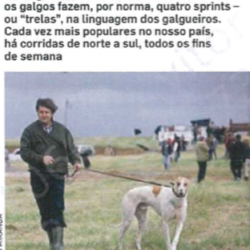 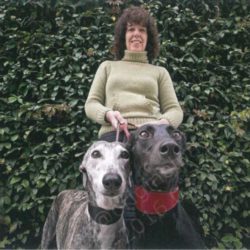 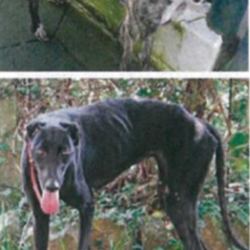 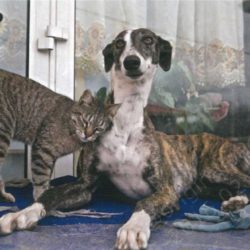 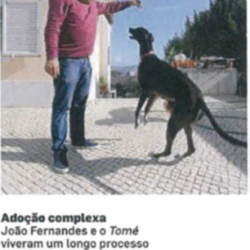