Self-Regulation Has Not Worked…And Never Will

Self-Regulation Has Not Worked…And Never Will

Last Tuesday Greyhound Compassion was present at the All-party Parliamentary Dog Advisory Welfare Group (APDAWG) in Portcullis House, London. The theme of the meeting was, “Greyhound Racing in the UK – An Update on Welfare.”

The meeting focussed on what’s happened since the post-implementation review of The Welfare of Racing Greyhound Regulations was signed off by DEFRA in 2016.

Stakeholders from across the debate provided in-depth contributions to the EFRA Select Committee & DEFRA consultations in 2015-2016 to make the case for a high standard of welfare for the tens of thousands of greyhounds racing on British racetracks.

A significant milestone was reached in March 2018 when the Greyhound Board of Great Britain (GBGB) published, for the first time in racing’s 92 year history in the UK, injury & end of life data in response to the DEFRA review. The publication was accompanied by a new 5 year Greyhound Commitment from the GBGB.

The GBGB presented its 5 year plan to: drive down euthanasia on economic grounds; cement the Greyhound Commitment; and professionalise the racing industry through apprenticeships. The GBGB added that it would be conducting research into the implications of temperature extremes for racing dogs, acknowledging that racing had continued at the majority of tracks during the “beast from the East” winter and 2018 summer heatwave. 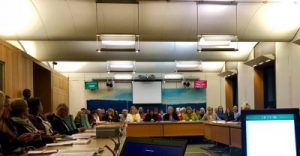 The GBGB pointed to its funding decline. High street bookies closing has meant 20% shaved off of their bottom line. The GBGB ’s overriding theme was one of ambition against the backdrop of independent rescues picking up the pieces – way too little, way too late. 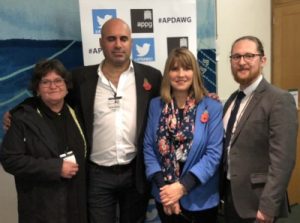 Clarissa Baldwin CBE covered the nobility of the greyhound and the origins of the breed. She openly touched on the failures of the GBGB in the past and acknowledged its attempts to put its house in order, and to engage more responsively with the Greyhound Forum (comprising: Battersea Dogs & Cats Home, Blue Cross, Dogs Trust, Greyhounds in Need, Forever Hounds Trust, Greyhound Trust, The Kennel Club, Wood Green Animal Shelters and RSPCA). She acknowledged that the greyhound deaths on economic grounds must be eradicated, “no place for trainers who consistently put greyhounds to sleep on economic grounds”. Clarissa recognised that the standard for trainers’ kennels is a BSI document available at a cost and, therefore, many trainers are reluctant to purchase it, thinking they could do without it.

All pretty tame, nothing new up to this point of the meeting. Step forward Trudy Baker, Andrew Knight and Nick Weston and it was clear that the GBGB had been defending the indefensible.

Trudy, of Greyt Exploitations, revealed how the GBGB has not complied with its formal agreement with DEFRA because it has not fully published the methods by which greyhounds left racing in 2017. Independent racing, racing abroad and other uses (which would include for research and/or dissection) are missing, yet they are categories on the GBGB Retirement Forms. 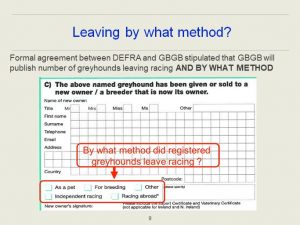 Greyt Exploitations also questioned why track fatalities declined rapidly between 2014 and 2017 while the rates for hock and wrist injuries have nearly doubled. It could be that in the face of having to publish death rates, the industry has taken steps to treat more injured greyhounds or it could simply mean that less greyhounds are destroyed trackside by a vet and more away from the track and by unknown methods – which is concerning. 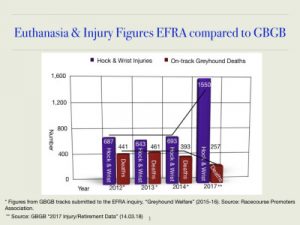 Greyt Exploitations’ own data showed 798 more injuries than the GBGB statistics. Greyt Exploitations illustrated the point of “missing” greyhounds with reference to a Greyhound Star article which noted that Ireland exported 11,034 greyhounds in 2017 predominantly to the UK. In the same year there were 1,497 British bred greyhounds making a total of 12,531 dogs, yet in 2017 only 8,094 were registered to race on GBGB tracks. Where are these 4,437 greyhounds?

We heard from Greyt Exploitations that the GBGB has failed to to obtain UKAS accreditation of trainers’ kennels by its agreed deadline of December 2017. Although the PAS came into effect in December 2017, UKAS confirmed as recently as 25 October 2018 there has been no extension to the scope of accreditation to include trainers’ kennels.
As if there was nothing left to question, Professor Knight blew some very crucial arguments out of the water. He very interestingly touched on “bony remodelling” whereby a racing greyhound’s skeleton adapts to propulsive forces and reabsorbs calcium from some areas and deposits it in others, increasing the chances of bone fractures.

Prof. Knight provided the GBGB with some food for thought if racing is going to continue in the UK and have a better welfare standard: 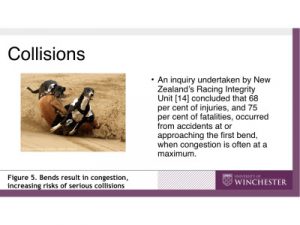 Collisione at the first bend

Nick Weston described how the League Against Cruel Sports is calling for a phased out ban given the GBGB’s failed attempts at reform, calling it “untenable and unacceptable that these animals have died for someone else’s enjoyment”.

We are posting the presentations we could obtain for our readers’ interest. Please do read them, this was a fact packed meeting with some very revelatory material.