Finding homes for greyhounds is a noble cause. However, this goal is complicated by the fact that greyhounds, because of the dog racing industry, are the most persecuted breed of canine. More greyhounds die annually than any other single breed of dog. The sheer numbers bred and retired, combined with the severity of injuries while training and racing, result in the destruction of tens of thousands of greyhounds annually. Despite the existence of over 200 greyhound adoption groups across the U.S., we still cannot quell this annihilation.Many adoption groups subscribe to the theory that as long as they find homes for some of the greyhounds, they are doing their part and that no other involvement is warranted. Nothing could be further from the truth. Taking an active position to protect greyhounds from exploitation will, in the long run, accomplish more than just the Band-Aid approach of finding adoptive homes for them.Adoption and advocacy are compatible missions and the ultimate objective should be to end the current and future suffering and destruction of racing greyhounds. If all greyhound adoption groups were to join together in demanding change within the industry, the movement would command more respect. As it stands now, some of the largest greyhound adoption groups are pandering to the racing industry rather than working to eliminate the conditions responsible for untold suffering of racing greyhounds.Greyhound advocacy groups monitor and hold accountable an industry unable or unwilling to enforce its regulations. People, who were once naïve about the term neutral in describing their position on greyhound racing, are beginning to realize neutrality is not an option when it comes to preventing the continued suffering of racing greyhounds. Emancipated from adoption groups which promote and defend the dog racing industry, many individuals are now joining the ranks of those of us who pledge to protect the dogs.Susan Netboy of Greyhound Protection League (www.greyhounds.org), Joan Eidinger of Greyhound Network News (www.greyhoundnetworknews.org), Christine Dorchak and Carey Thiel of GREY2K USA (www.GREY2KUSA.org) have for years been blazing a trail for other advocates to follow. Exposing atrocities, corruption, and people with bad intent, these organizations are at the forefront of the national movement to educate people on the plight of the racing greyhound.In the state of Kansas, racing greyhounds have been declassified as dogs so that they dont fall under the protection of animal cruelty statutes. This kind of legislation, particularly in the state that is home to the Greyhound Hall of Fame, is a blatant indicator of the lack of compassion for the dogs who are the very backbone of the racing industry.These laws must change, but they will not unless advocates lead the way. GREY2K USA board member and Vice President of Kansas City Retired Greyhounds as Pets, Kevin Neuman, is spearheading the campaign to change this law in the next Kansas legislative session. GREY2K USA believes the key to protecting racing greyhounds is to end dog racing by changing laws, and they are hard at work doing exactly that.Greyhound Protection League (GPL) recently reported the disappearance of approximately 190 greyhounds from the Tucson Greyhound Park (TGP). The track was paying a Colorado trainer $150.00 per dog to remove them from the premises. Asking for no proof of where he was taking the dogs, TGP employees helped him load the dogs onto trailers headed for parts unknown. As of this date, approximately 8 of those dogs have been accounted for.During hearings with the AZ racing stewards in charge of the inquiry on the missing dogs, the Colorado trainer has been unable to provide documentation of where he took the dogs. Thanks to Greyhound Protection League, a reward for up to $15,000.00 has been offered for information leading to the recovery of the dogs. The story has gained national media attention and has revealed one of many reasons this industry must be monitored by greyhound welfare advocates.The penalties for such transgressions within the dog racing industry are minimal. Relatively small fines and short suspensions are commonplace. The above-mentioned Colorado trainer has been in trouble before, but previous disciplinary actions by the state racing departments have failed to deter his continued illicit dealings. If not for the greyhound advocacy groups working together, few, if any of these cases would be investigated or pursued by the dog racing industry.Adoption alone is not the answer. Fortunately, for the greyhounds, there are many of us so committed to the plight of the racing greyhound that we are immersed in multiple efforts to protect them. Scrutinizing an industry that is hopelessly myopic in its view of what constitutes compassion for animals, should be the goals of all who claim to have concern for the welfare of racing greyhounds.Please support organizations whose purpose is truly that of keeping greyhounds out of harms way.Help us help the greyhounds by doing everything possible, not just scratching the surface of what can be done. Visit the websites listed above to find out what you can do to help. Please read Public Awareness on the GCNM website (www.gcnm.org) for articles that can help you understand why advocacy is so important for our beloved greyhounds.Our lives begin to end the day we become silent about things that matter. Martin Luther King, Jr. 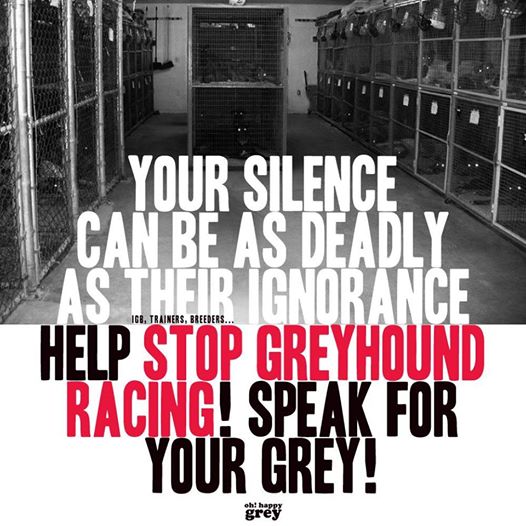