Qatar Airways says it will not carry greyhounds to China

18 MAG 2016 — Qatar Airways has announced that it will not carry shipments of greyhounds to China.

Reacting to comments posted on its Facebook page, and a petition signed by over 10,000, the company stated: “Qatar Airways has never transported a shipment of greyhounds to China. Due to animal welfare concerns, Qatar Airways also has no intention of doing so in the future.”

According to a report in the Sunday Times, Qatar was due to transport 24 Irish greyhounds from London’s Heathrow to Hong Kong via Doha last Thursday. However, the dogs were prevented from travelling by Heathrow Animal Reception Centre who “refused permission for an airline to transport them because the crates in which they were carried did not meet regulations”.

Greyhound trainer and hare courser, Robert Green, who owns Banteer Greyhound Schooling Track in Cork, was identified as the individual who tried to send the unfortunate dogs to race at the infamous Canidrome track in Macau. The Sunday Times reported that Green “advertised online offering to buy greyhounds for cash, regardless of whether the dogs have pet passports”. 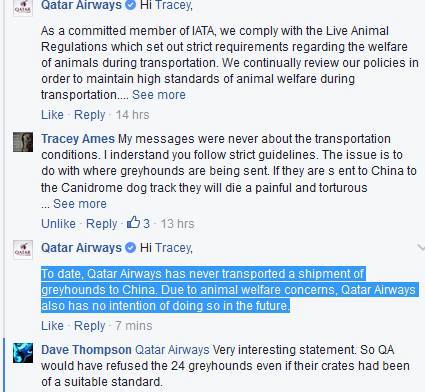 Thumbs up to Qatar Airways for this positive move. They join other airlines who have already indicated that they will not transport greyhounds to China. Emirates Airlines moved quickly to confirm to the Irish Council Against Blood Sports that it has “never shipped greyhounds to China (Hong Kong or Macau) on our services from Dublin”. The CEO of British Airways has also assured us that they “have not transported greyhounds from Dublin to Macau on any BA aircraft”. In December, following a damning TV report about the cruelty of the Canidrome, Qantas and Cathay Pacific airlines announced that they would no longer transport racing greyhounds from Australia to Asia.

Our attention now returns to Germany’s Luftansa Airlines which has so far refused to pledge not to carry greyhounds to China.

One of the many comments posted on the Lufthansa Facebook page stated: “I have learnt that Lufthansa are the airline that transport greyhounds from Ireland to Macau for a life of misery in the Canidrome.” The official reply from Lufthansa: “Please appeal to your responsible authorities to change the legal framework that allows such mistreatments to happen. As a company, we are not able to determine the purpose for which animals are making their journey.”