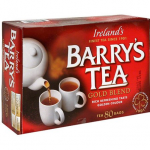 (full and integral post)
Millions of Irish ex-patriots connect with their homeland through Barry’s Tea. However they may not be aware of the brand’s connection with greyhound cruelty. Barry’s Tea sponsors greyhound racing at Curraheen Park Greyhound Track. The greyhound racing industry is synonymous with dog drugging, wastage, neglect and greyhound export to countries like Pakistan and China. Why on earth would such a well known brand want to involve itself with such toxic brand like the Irish greyhound industry?

Watch this video to hear former Chairman of the IGB admit that thousands of dogs die each year in the name of entertainment.   https://www.facebook.com/banbloodsports/videos/1300540866728135/

A former chairman of the Irish Greyhound Board has said it's okay to kill thousands of dogs in the cruel greyhound industry.During an interview on Cork's 96FM on Wednesday, Paschal Taggart was asked "Do you believe it's okay for thousands of dogs to be killed in the name of entertainment?"Taggart's appalling response was: "I absolutely do."Paschal Taggart, introduced on the programme as "the man credited with building the Irish greyhound industry", attempted to defend the killing of thousands of greyhounds by saying that "there are thousands of race horses around the world killed in the name of sport.""Most of them [the dogs] are kept alive – sorry, some of them are kept alive – and there are ones at the end of their time – they're injured or that – I do [believe it's okay to kill them]," he went on to say, adding "You can't have camel racing, you can't have horse racing, you can't have dog racing without euthanasia. It has to be done properly and correctly. Absolutely."Responding to a question about cruelty in greyhound industry, Mr Taggart said "every sport is cruel – horse racing is cruel."He claimed greyhound owners "look after their greyhounds better than they look after their children – or as well as."Irish Council Against Blood Sports spokesperson Aideen Yourell described Mr Taggart's statements as "dreadful"…"He said it himself – you have to put them down. That's absolutely dreadful. Thousands of them are put down and in the name of what? Imagine a sport that's based on cruelty [in which] greyhounds are disposable commodities. A greyhound's natural lifespan is 14 years and in the greyhound industry, it's 3-4 years. After they stop winning on the track, that's it."Asked by programme presenter PJ Coogan, "do you believe it's time to let the greyhound industry go?", Aideen emphatically replied: "Absolutely."