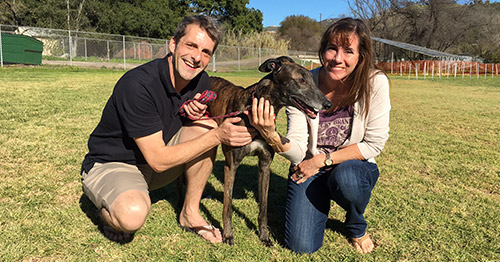 Recently, we asked you to share your greyhound’s story. As with our annual calendar contest, we received entries describing lucky hounds who had been adopted from anti-racing groups, pro-racing groups and groups that claim no position on dog racing.

This is something we must all celebrate!

In fact, greyhound adoption should never be politicized. The only two questions that should be raised in placing an unwanted puppy or a finished racer are 1) How soon can this dog be transitioned out of the racetrack and 2) Where is the closest, bona fide, adoption group located?

Unfortunately, having sensed its coming dissolution for nearly twenty years, the commercial dog racing industry has begun holding greyhounds hostage and purposely limiting access to select adoption groups. In an attempt to blunt criticism, such groups may be required by contract not to speak critically about racing. Nor can they tell about the condition of the injured or sick greyhounds that they receive. Industry bullying is so effective that groups even refuse donations and avoid inclusion on any referral pages deemed to be against racing.

Sonia Stratemann of Elite Greyhound Adoptions of South Florida learned the hard way that speaking out rouses complaints not only from kennel operators but also from fellow adopters:

“In the past, I only posted photos of dogs that looked good. If one came in that was especially thin or injured, I usually just posted a head shot. For years, I took in sick dogs that other groups would not and I always stayed quiet. But recently, I posted about one dog’s condition on Facebook, and when another dog from the same kennel was no longer wanted, he was left at a vet’s office to be killed. Out of spite, the kennel worker had refused adoption! The only reason greyhound Holly is still alive is because my friend begged for her life. Ironically, when she dropped Holly off, my friend told me that she hoped I had finally “learned my lesson” and to keep quiet! She hates racing too, but stays neutral to keep them happy. Here’s a photo of Holly, seconds after arriving.” 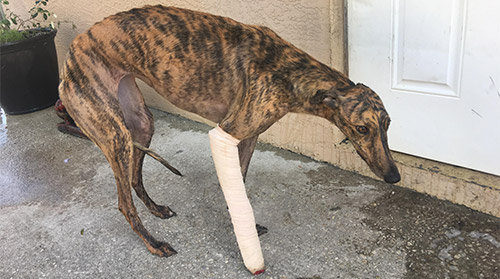 This kind of psychological warfare must stop. As one adoption advocate in the Pacific Northwest put it, “The racing industry has succeeded in coercing many rescue groups into changing their public position on racing from ‘against’ to ‘neutral.’ These groups can’t even use the word ‘rescue.’ IMO, we should be allowed to help regardless of our feelings about dog racing – pro or con – ESPECIALLY if anyone is expected to believe the racing industry is pro-greyhound.”

Another defense mechanism used to prolong the cruelty of dog racing is the panic-inducing talking point that thousands of greyhounds will die should a track or tracks close. It is true that the number of dogs available for release increases in the wake of a track’s closure, but that increase is temporary. The immediate problem is real, but it’s one that is expected and can be prepared for in advance. The benefits of a track closing are permanent and far-reaching. This is because the cycle of over breeding and killing stops. For good. This is particularly important in Florida, which has an abundance of dogs at breeding farms and racetracks throughout the state. On November 6, when voters decide whether dog racing should be phased out, the historic Miami track will already have stopped dog racing, three other tracks will have ended their final season, and the remaining facilities will have twenty-six months to wind down and release their dogs to waiting adoption groups both in and out-of-state.

It is important to understand that the recent claims by Florida kennel operators that dogs “will be killed” is not a passive statement. This is all about control and anyone who utters these words is literally threatening to kill his or her own dogs. Think about that. Just as greyhound adoption groups are bullied, kennel operators are now also trying to bully the general public into voting against helping dogs.

Empty threats like these must be considered for the scare tactic that they are. We have heard the same cynicism in Massachusetts, New Hampshire, Arizona and every other state that has rightfully voted to end commercial dog racing. When Tucson Greyhound Park closed, for example, we worked directly with the track owners to fund adoption. In our home state of Massachusetts, there was a record year for adoption following voter approval of the phase-out of dog racing.

Historically speaking, when a dog track closes, countless volunteers are mobilized to find homes for any and all displaced dogs. Drivers from hundreds of miles away converge on the track and pick up dogs to be taken to adoption groups and foster homes. For example, when Plainfield Greyhound Park in Connecticut closed in 2005 volunteers from as far away as the Midwest and Canada sent rescuers. The closure of Multnomah Greyhound Park in Oregon in 2004 and Geneva Lakes Greyhound Park in Wisconsin in 2006 sparked a similar response. While some dogs were sent on to race elsewhere, many others were made available for adoption.

Later, with the closure of Mile High Park in Colorado (Winter 2008) and The Woodlands in Kansas (Fall 2008), all the dogs were safely moved out. Greyhound advocates, including board members of GREY2K USA, joined hands with track adoption groups to help the dogs. In December 2009, the 200 remaining dogs at Raynham Park were re-homed, and a similar number had been transferred out of Wonderland, also of Massachusetts, when that track held its last season in September of that year.

It’s no secret that greyhounds often pay with their lives while competing. They break their necks, suffer paralysis and some are even electrocuted. In Florida, state records show that an innocent greyhound dies every three days. This cannot and should not go on.

Years ago, as I first thought about this issue, I consulted with one of GREY2K USA’s founders, Dr. Jill Hopfenbeck. She once served as the president of a local greyhound adoption group and had treated over 1,000 rescued racers by that time. She listened to me expressing at length my concern about the industry’s threat to kill dogs should our 2008 Massachusetts ballot question pass. She paused and then looked me straight in the eyes and said with all the certainty of her many years of saving greyhounds: “Christine, the best thing that can happen to a greyhound is for racing to end. The injuries stop, the cages open and greyhounds get to become just dogs again. Don’t ever forget that.”

Whether one agrees with Jill or thinks dog racing is the best invention of 1919, the truth is that we all love our greyhounds. Now it’s time to show it.

We applaud independent networks like that the Greyhound Adoption Action Alliance for saving dogs now and for preparing to help even more greyhounds as tracks wind down operations in Florida. With the passage of Amendment 13 and as other tracks also close around the country, let’s work together to promote adoption and put the dogs first.