Kids’s playground fundraiser at track where greyhound CRIED OUT IN AGONY! 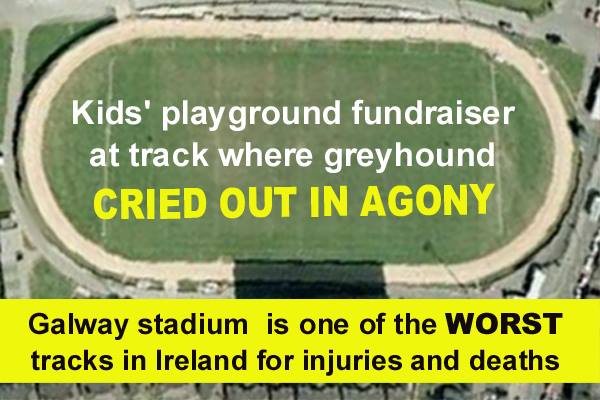 A fundraiser for a children’s playground is to be held at a greyhound track where a dog could be heard crying out in agony earlier this year.

The “Community Playground for Clarinbridge” group has announced a “fantastic community fund raising night” at Galway stadium – one of the worst tracks in Ireland for injuries and deaths. https://www.igb.ie/talking-dogs/combo-may-prevail-on-clarinbridge-fund…raising-friday-at-galway/

In the past three and a half years alone at the Galway track, 80 greyhounds suffered injuries and 21 were killed. Nationwide, during the same period, 1,369 greyhounds were injured and 438 were killed by track vets.

One of the many victims at Galway track was 1-year-old “Ballycastle Val” who collided with another greyhound and tumbled at the beginning of what was to be her first and final race.

As the 5th January 2018 race continued, her cries rang out around the stadium and are clearly audible in the Irish Greyhound Board’s race footage – https://www.igb.ie/videos/videos/?raceid=GLY_2018_01_05_03

ICABS has brought this sickening footage, along with the dog death statistics, to the attention of Clarinbridge community group. The group’s overall playground fund target is €120,000 – less than a third of the €307,692 of taxpayers’ money the dying greyhound industry gets every single week of the year from the government (totalling €16 million per annum).

Join us in contacting the “Community Playground for Clarinbridge” group and urging them to stop fundraising at a greyhound track where animals suffer and die.

The cruel and crumbling greyhound industry has received nearly a quarter of a billion euros of taxpayers’ money since 2001 (including €16 million for 2018). Urge Taoiseach Leo Varadkar and Finance Minister Paschal Donohoe to end funding to the greyhound industry and instead direct the money to charities, community groups, animal rescue centres and other deserving causes. Email “Stop funding the cruel greyhound industry” to taoiseach@taoiseach.gov.ie, leo.varadkar@oireachtas.ie, paschal.donohoe@oireachtas.ie, minister@per.gov.ie