From Ireland to Portugal – another route for trafficking greyhounds 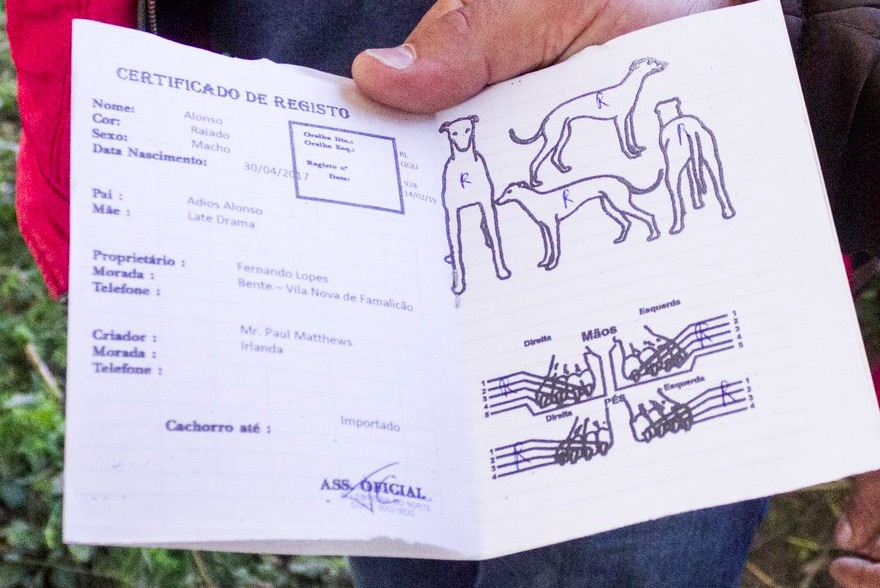 There is a country in Europe which has a great history, but we tend not to hear much about it. It often seems to be a bit in the background: at most we may hear about it for being the birthplace of the greatest living football player, or because it is the homeland of Fernando Pessoa, one of the greatest poets of the 20th century.

However we tend to underestimate the presence of a far less worthy reality such as greyhound and galgo racing. Indeed, if you check on one of the reference sites for greyhound racing such as Greyhound-data, you will discover that Portugal boasts, so to speak, of a not inconsiderable number of breeding kennels for racing greyhounds and galgos: 20 to be precise.

In actual fact we can’t say if or to what extent that list is currently accurate: many breeding facilities may have closed, while others still may exist without being mentioned.

What is interesting is the fact that on the breeding kennel pages – at least the ones with accurate information – 50 Irish greyhounds are cited as breeding stock.

For their part, the Portuguese owners of Irish greyhounds tend to proudly display the pedigree of their dogs, as one can see in this report by Publico.(2). Here we see an identity booklet, clearly inspired by those used in Ireland, which refers to a dog named Alonso, born 30th April 2017 from Adios Alonso and Late Drama, bred by Paul Matthews.

This proves that a continuous stream of greyhounds is being imported from the Irish racing industry. It would be interesting to know if these dogs – who would certainly only represent a part of those imported – are still registered with their Irish owners, and if there is any trace of their exportation or even evidence of payment transactions and relative taxes. This is no small matter, given that according to an article in Visao (3) dated 2/06/2016, the price of an Irish greyhound varies between €5,000 and €30,000 euros.

The situation we have summarised here requires a radical rethink of the categories we tend to use, particularly the line we usually draw between commercial and amateur racing.

Commercial greyhound racing is characterised by the presence of a regulating authority, state authorised betting, an industrial breeding system, a greyhound identification system via tattooing, an organised system of kennels and a network of racetracks. But that does not mean that everything that does not fall into these categories can be necessarily defined as amateur or non commercial racing.

For it is one thing for a few enthusiasts to race their dogs for fun every now and again – dogs who live in their homes as pets – but quite another to have a system of breeding kennels continuously importing dogs to breed litters of pups to be used in more or less regulated competitions. These dogs are transported in vans and trailers identical to those used in Ireland, and according to some press publications such as the aforementioned Visao are subjected to doping and training with electric shocks, only to be abandoned when of no further use or when injured.

This intermediate type of racing cannot therefore be exactly compared to industrial scale racing, but neither should it be confused with the kind of racing taking place in some countries where a few amateurs take their pet dogs racing every now and again – dogs who normally live at home with them and are treated as pets in every other respect.

It is a type of racing which by extension, due to its links with the world of commercial dog racing, its training system and monetary exchanges, is very close to commercial greyhound racing.

It should therefore be treated as such, and as far as we are concerned, opposed and fought against, because it uses and exploits greyhounds without respecting them.
By Massimo Greco

[1]The names are listed in  www.greyhound-data.com