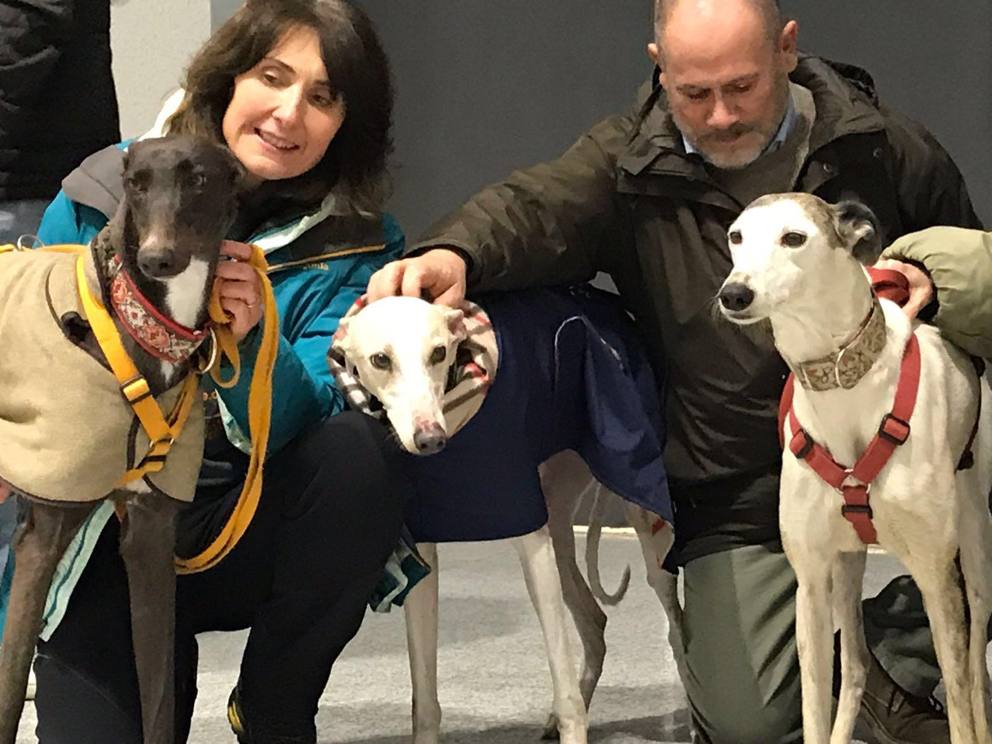 The racing industry habitually exports greyhounds – not just from Ireland and the UK but also from New Zealand, USA and Australia. As far as Europe is concerned, some dogs are exported to countries where races take place but where betting on dogs is illegal – at least officially. Such is the case for instance in European countries where the European Greyhound Racing Confederation is active such as Romania, Denmark, Finland, the Czech Republic and Hungary. In addition, anyone can legally acquire an Irish greyhound for amateur racing in many countries, including Italy. Whether we find this acceptable or not, that is not to say that the dogs are badly treated: even though we are opposed to amateur racing we are aware that it is very different from commercial racing, and if the dogs are treated like pets they are a lot better off than with trainers.

Things get serious however when the dogs are systematically exported to countries where there are no adoption programs or worse still, no decent animal protection laws. This is the case in some Asian countries such as China and Pakistan mainly, but also in a lesser way Vietnam and South Korea. In Pakistan greyhounds are used for breeding as well as coursing and hunting, while in China they are used for illegal racing with betting, amateur racing, hunting, and spectator racing in the Shanghai zoo. In these countries the dogs often live in shameful conditions, which are decidedly worse than those in their countries of origin – hardly ideal though the latter themselves might be – and their fate is already determined by the lack of adoption prospects. It is not rare for greyhounds to end up in the dog meat markets of China alongside thousands of other dogs, often stolen.

Public opinion in the dogs’ countries of origin is outraged by this – and rightly so – even though in terms of actual figures, the number of greyhounds killed in the oh so civilised Ireland, UK or Australia is infinitely higher than those exported.

The exportation of greyhounds to the aforementioned Asian countries is worrying, especially with regards to China: betting on races is illegal in this country, but if that ban were to be lifted a vast market would open up which would dramatically increase the exploitation of greyhounds everywhere else in the world. And that is quite apart from the types of cruelty documented in some parts of China, such as boiling dogs alive.

So every initiative able to provide evidence of exports to these countries is important, and shows that the greyhound racing industry doesn’t care in the slightest about the dogs, because they are only perceived as a source of profit.

On the other hand however it is not by saving a few dogs, or stopping a few of them from leaving, that the problem will be solved, because exports are a consequence and not a cause. The cause is the fact that racing greyhounds, in countries where commercial greyhound racing exists, are basically racing commodities and are therefore bred, reared, trained and sold for profit to buyers who use them for racing or hunting and not for letting them live as pets. That is the fundamental difference between those who breed and sell pets and those who breed and sell racing dogs in an industrial manner: those bred by the former have the legal status of pets to all effects right from birth.

Consequently, if we wish to eliminate exports we must work to ban commercial dog racing in the countries the dogs are being exported from, and we must support all the initiatives of the local groups and organisations who are fighting to block the development of the demand for racing greyhounds in the destination countries. Abolishing the demand for these dogs will damage the industry which supplies them, and in the end the industry will stop supplying them. No demand=no supply.

The only effective way of saving greyhounds from being exported is to intensify and strengthen the work to close down the industry, by building a network between all those who wish to see it end. To achieve that result we must intensify our awareness raising campaign work, but above all – with the help of informed public support – we must lobby and manage to convince the political powers that be in each country of the importance of banning dog racing, for they alone have the power to close tracks and prosecute those who bet on the dogs.