Another day, another death: this man slaughters greyhounds on an industrial scale

By Daniel Foggo Published: 16 July 2006 With his chained-up rottweilers looking on, the bearded and bespectacled Smith led the lithe racing dogs — one a fawn- coloured brindle and the other black with white markings — across his plot and into a breeze-block shed. The animals appeared sprightly and alert as if they hoped they might soon be allowed off the lead for a run. But seconds later two sharp reports rang out. They had been killed.

Anyone who had worked in an abattoir would have recognised the sounds as the discharging of a bolt gun, a weapon that fires a metal bar with enough force to smash the toughest skull. The dogs emerged lifeless and limp in Smith’s bloodied wheelbarrow. He dumped them in a freshly dug hole on one side of his one-acre garden before covering the grave with earth using a mechanical digger. Smith contemplated his garden for a moment with a look of satisfaction. On the other side of his plot his lettuces were coming up nicely. 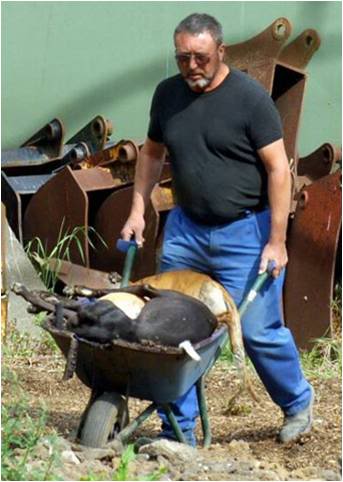 The episode, on Wednesday, was captured on film by a photographer for The Sunday Times. It was repeated again the next day, this time with greyhounds emerging from a white van and a silver Ford Mondeo before disappearing into Smith’s killing shed. It was a scene that has been repeated regularly in this secluded corner of the seaside town of Seaham, in Co Durham — a slaughter business that can be exposed for the first time today after a Sunday Times investigation. Smith’s unofficial abattoir and graveyard have quietly serviced the greyhound racing industry in the north of Britain for about 15 years. Calculations by this newspaper suggest that over that period at least 10,000 dogs have been killed and buried in the plot at the back of his house. Before Smith, his father, now 81, provided a similar service. According to a dog track insider, the trade has been a secret that greyhound trainers and owners have been keen to keep. “Only doing two dogs a day is a bad day for him. It is not unheard of for him to do around 40 a day and if anyone ever digs up that garden it will be like the killing fields,” we were told. “He has made a mint out of it. “This service is for the licensed trainers who have 50 or 60 dogs in their kennels. The greyhounds are used for the afternoon races that appear on television. These dogs have made a lot of people a lot of money and they don’t deserve to be shot in the head. It is a scandal that the industry should be ashamed of.” Campaigners have long suspected that such an operation was being run somewhere in Britain but have never been able to pinpoint its location. The RSPCA says about 12,000 greyhounds a year disappear and are unaccounted for. Greyhounds have only a short racing life. Once they reach 3½ to 5 years old — out of a natural lifespan of about 12 to 14 years — they are considered too slow to compete. Some go to new homes as pets, in accordance with the official policy of the National Greyhound Racing Club (NGRC), the industry’s governing body. Many others simply vanish.

Maureen Purvis, of Greyhounds UK, a pressure group that gave evidence to a House of Commons select committee regarding the new bill, said: “We wanted the tracks to come under the jurisdiction and inspection of the local authorities. The industry has had 80 years to regulate itself and it plainly is not working.”