Award ceremonies are weirdly popular these days. Barely an evening goes by in Britain without an annual presentation on behalf of hairdressers or funeral celebrants or hotel booking websites. No industry is complete until they have a date in the calendar for a “gala” evening of cheap chicken dinners, frayed nerves and ersatz glamour.

And so to the Greyhound of the Year Awards 2015. The dog owners, trainers and bookmakers’ big night got off to a bad start outside London’s Lancaster Hotel on Sunday night. As they made their way inside, attendees were forced to endure an angry mob of around 100 people chanting “Scum!”, “Shame! Shame! Shame on you!” and even one or two people shouting, “Murderers!” 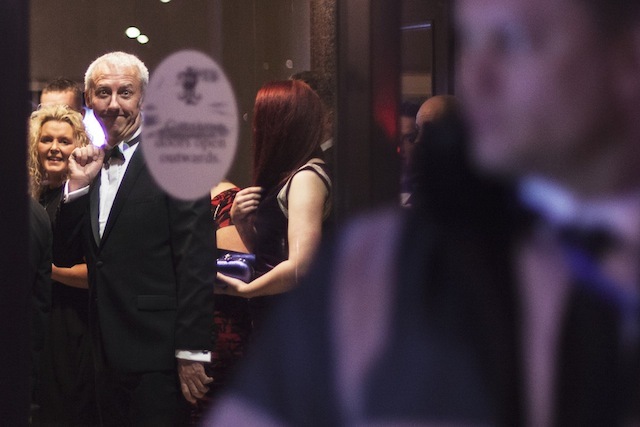 Some flicked a defiant middle finger or blew kisses as they strode past, but from the pensive looks on many of the faces in the foyer, being called “scum” probably didn’t make them feel like they were the glittering stars of the Dog Oscars as they began an evening of back-slapping and speeches.

This they did not need. After all, their business is not in the best of health. In 2006 attendance at British tracks stood at 3.2 million, but by 2012 that number had declined to 2 million, and the industry’s income is down 43 percent since 2008. 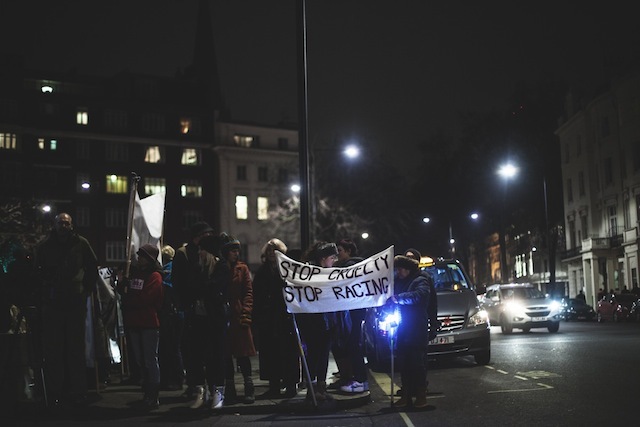 The protestors were in no mood to go easy on a declining sport, however. The animal rights and ordinary dog owners gathered outside the hotel were determined to give the party-goers a hard time about the treatment of the racing greyhounds and the fate of thousands more dogs deemed “surplus” each year. 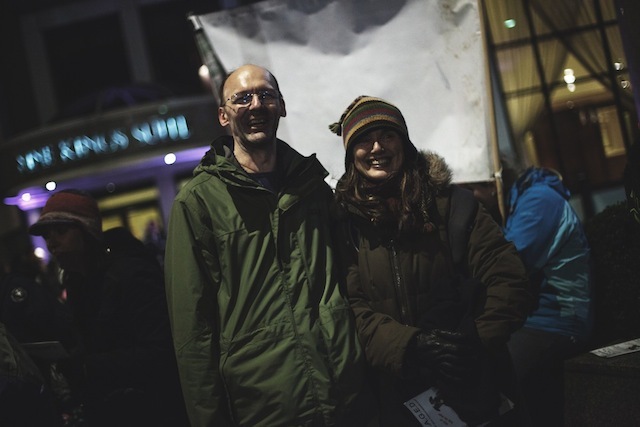 Isobel Deeley and Gavin Erickson have two greyhounds at home in Kent. Two years ago they began reading stories about former racing dogs being killed or discarded.. “We’re not really demo people at all, but when I started looking into what dog racing actually does, I became completely appalled,” said Isobel.

“A lot of people here are the same,” added Gavin. “Ordinary, well-meaning people who want to try to do something about this exploitative industry. It’s quite interesting for middle-aged ladies to be shouting ‘scum’ at animal trainers. The very, very poor treatment of animals for money – that’s upsetting to a lot of people.” 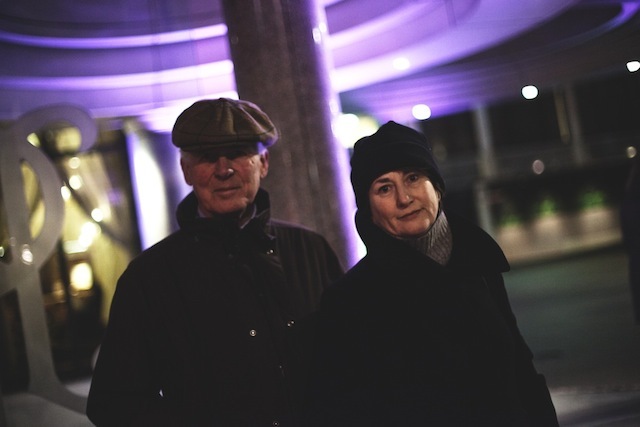 Bridget and Barrie Mayes travelled to London from Dorset. The couple owned a lurcher – a greyhound crossed with a collie or terrier – for 14 years. “We learned about the intrinsic cruelty of the sport,” said Bridget. “There’s a huge number of dogs over-bred each year and no transparency about the treatment of those who do race. Frankly, I think it’s a disgusting activity – we should have grown out of it by now.”

Barrie added: “They’re just fantastic animals, and once they cease to be useful, they can sometimes be tossed away like an old bicycles. There are some good trainers, but the industry as a whole isn’t interested in the welfare of the dogs.” 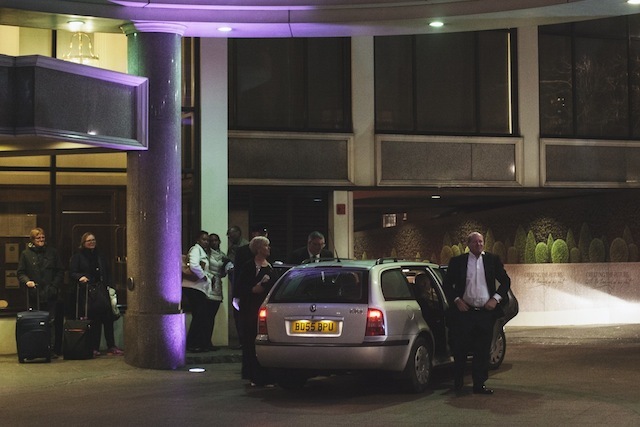 According to the League Against Cruel Sports, most active race greyhounds are let out of their kennels for exercise and daylight only three or four times a day for periods of 15 to 20 minutes. The campaign group believes least 10,000 dogs are made surplus every year – 8,000 retired racers, and the rest through the over-breeding of young dogs who don’t make the grade. Small, independent re-homing charities are often left to pick up the pieces.

The industry body Greyhound Board of Great Britain (GBGB) describes these figures as “inaccurate guesswork”. A spokesman told me, “Far from overproduction, the number of greyhounds bred in the Britain has been in sharp decline for a number of years. The vast majority of British bred greyhounds are registered to race with GBGB and those that do not meet the race track are often homed either by the breeder or with responsible re-homing charities.”

There is concern too over injury rates, figures of which the self-regulated industry does not publish. 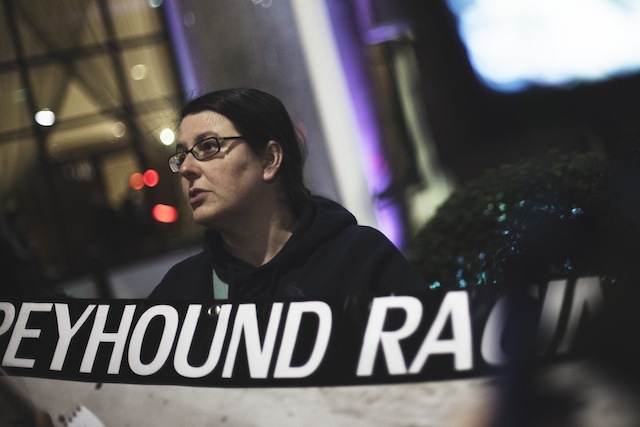 One of the protesters, Vikki Squires, is a volunteer at Birmingham Greyhound Protection, and currently looks after a greyhound on a “foster home” basis. “You see a lot of adverts on Gumtree like, ‘Ex-racer, free for a good home’,” she said. “But a lot of the rescue groups and individuals can’t ask too many questions – they’re just glad to give the dog a safe home. The one I’m looking after – it’s been difficult to house train. They can be very timid if they’ve been neglected.” 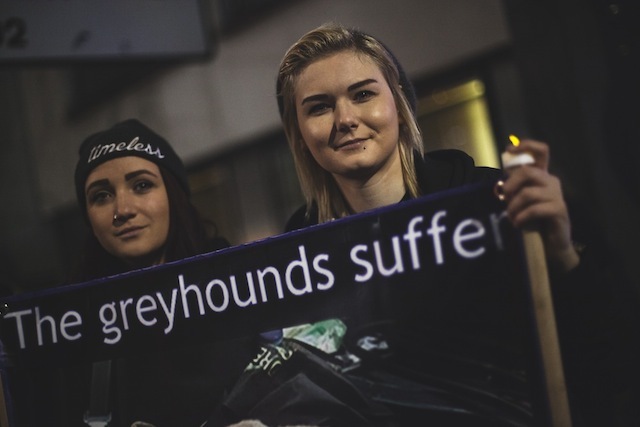 Toni Tuesday and Steph Maxwell, both from London, came along to protest at the idea of dog racing as cheap and cheerful entertainment. “It might be a night out for stag and hen parties, but they’re not thinking about what’s involved,” said Steph. “If people just look into it, they can’t ignore what’s right and wrong. I think the protests and leafleting outside stadiums and all the Facebook groups are having an impact. If it got to the point no-one was attending anymore, that would be great. 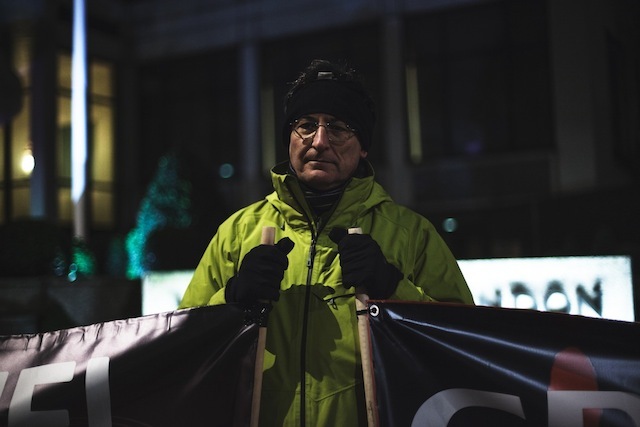 Massimo Greco flew over from Italy for the weekend just to stop Greyhound industry Godfathers enjoying theirs. “I began adopting greyhounds six or seven years ago, and then I realised it wasn’t enough – I was part of a worldwide fight against this industry,” he said. “The decline of dog racing in the United States has been very good, and I hope we can have the same thing happen in the UK. The thing that gives me hope is that British people love their dogs.” 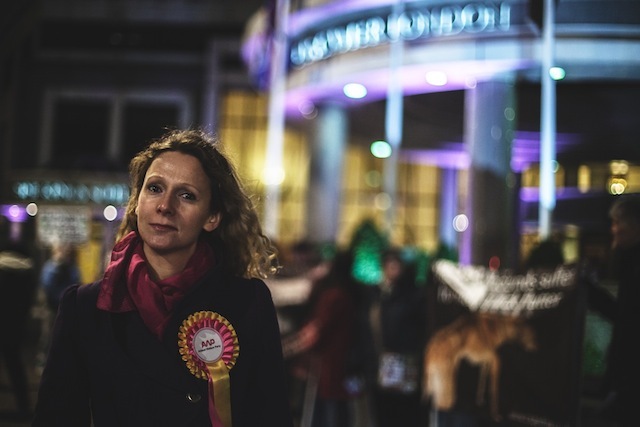 If you’re reading this thinking, “if only I could vote for these people in the upcoming elections”, then you’re in luck. The leader of the Animal Welfare Party (AWP) – which has likened the fight for animal rights to those against slavery and for Universal Suffrage – Vanessa Hudson, also attended the protest. “It’s not a proper activity for 2015,” Vanessa told me. “We understand there are livelihoods at stake, so I don’t want to be callous about the decline of the industry, but I’m encouraged that it seems to be declining of its own accord.” 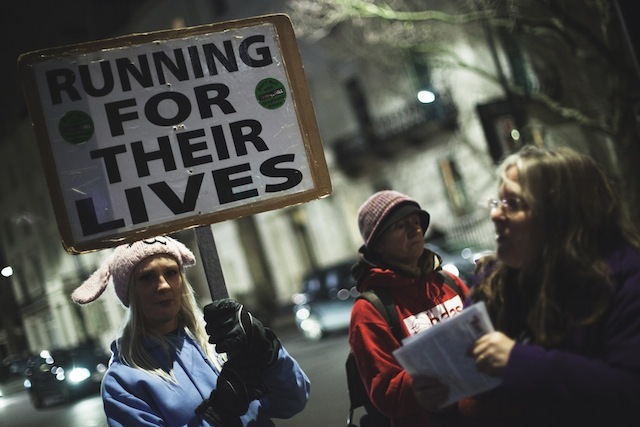 It’s probably a tad hasty, however, to conclude the sport has no future. It survives because of something called BAGS – the Bookmakers Afternoon Greyhound Service – that beams live footage onto bookies’ screens. The BAGS payments are worth around £25 million to British racecourses each year.

In fact, a 2014 report by the GBGB says the BAGS TV races are now being sold to betting operators in “international territories as far afield as Azerbaijan, Poland, Greece, Spain and the West Indies and Sri Lanka” and states that, “there is potential to substantially grow revenues further.”

It means that even if the number of people going down the dogs is in decline, a growing audience of gamblers inside betting shops – both here and in Azerbaijan, apparently – will keep the industry propped up for the time being.