Already in 2011 IGB planned to export Irish greyhounds, invest in, and develop, racetracks in China.

It would also send over ‘qualified’ Irish personnel, thus providing, in its own words, new  ‘job opportunities’ for Irish industry employees such as owners, breeders, trainers, etc. Adrian Neilan, the CEO of Bord na gCon (IGB), called all of this a ‘marvellous business opportunity’ and ‘a very significant outlet for our hard-pressed‘. This IGB’s multimillion-euro proposal to develop a racing industry in China raised an outcry from animal welfare activists worldwide, including 37 celebrities, among them the award-winning actor Brendan Gleeson, Ricky Gervais, Jilly Cooper, Annette Crosbie, Sharon Shannon, Gavin Friday, Louis Walsh, Frances Black, the Irish jewellery designer, Geraldine Murphy, who signed a letter of petition against The Irish Greyhound Board’s (IGB) plans to invest in, and develop, racetracks in China.

‘This is not just a cynical move, but a sinister one.

Unlike other breeds, greyhounds tend to be portrayed as commodities. But they are not machines. They are creatures who feel. Yet their lives are so undervalued, they are regularly subjected to neglect and abuse all over the world.

In China, there is a massive amount of well-documented evidence of dogs and cats being thrown alive into boiling water, and then skinned, alive, to eventually end up for sale in open markets,’ the letter stated. (irishtimes/letters/greyhound-racing-in-china)

And again:  We are horrified that the IGB would even consider conducting business in a country with such a terrible record for animal abuse – where dogs are both skinned alive for their fur and killed for human consumption. (https://www.thepetitionsite.com/it-it/3/say-no-to-greyhound-exports-to-china/)

At the beginning of May 2011, following considerable public pressure, the Department of Agriculture denied the Irish Greyhound Board permission to export Irish greyhounds to China, but they were still considering granting permission for the board to develop five stadia there. ‘But if this project goes ahead, the letter pointed out, the IGB “will have to get Greyhounds from somewhere.” 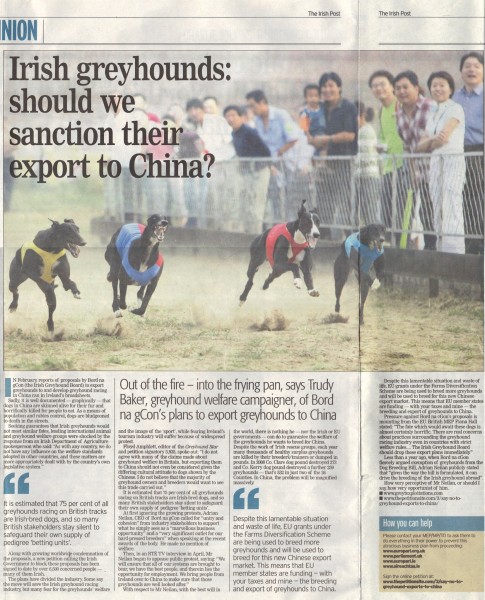 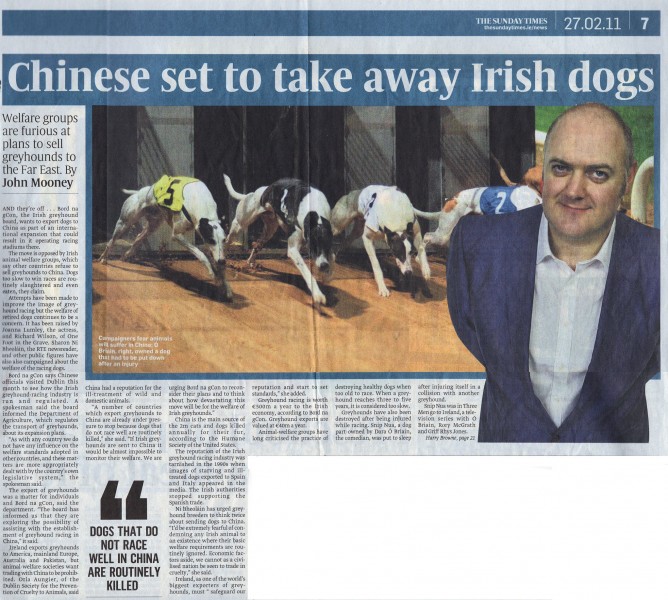