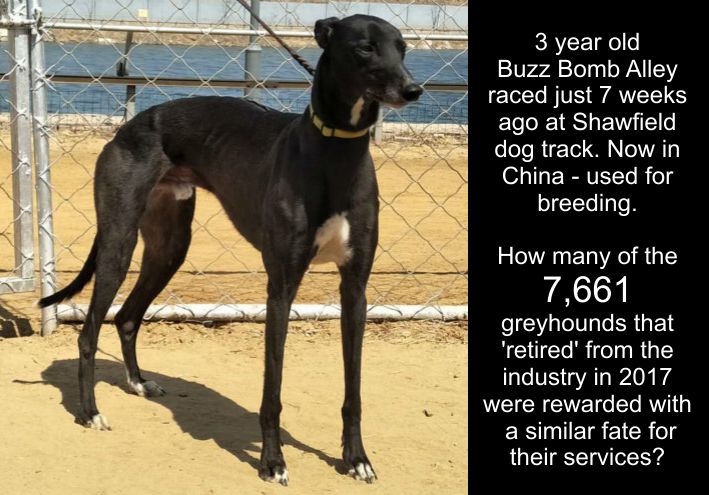 At long last the GBGB – i.e. the UK greyhound racing industry – and its CEO Mark Bird have woken up to the problem of British and Irish greyhounds being sent for breeding under often shameful conditions to countries like China and Pakistan.

That this was a regular occurrence has been known for some time by those following the pages of anti racing groups such as Greyt Exploitations1 and Caged Nationwide2. We ourselves have published numerous articles on this problem throughout the years.

So it does arouse suspicion that the industry is only turning its attention now to a problem that has been common knowledge for some time, and about which it would most certainly have more information readily available than we do. Indeed, either the GBGB knew all along about the exports but took no interest in the matter, or it did not know and therefore is in the dark about what goes on, i.e. on matters that it should have control over. Since we do not believe that they are inept to such a degree, we are inclined to go with the first hypothesis.

We believe that the industry’s apparent new interest in the problem of exports is due to the wide media coverage that this topic has received of late. Basically it’s a marketing ploy by Mark Bird & Co to try and show that they are interested in welfare. It will probably end like it always does, with a recommendation to trainers, along with the admission that one cannot stop a private individual from sending dogs wherever he likes, as long as no laws are broken.

It is worth remembering that in 2011 the IGB – i.e. the Irish racing industry – tried to reach an agreement to export massive numbers of Irish greyhounds to China3: the plan was stopped, but that has not stopped private individuals from merrily continuing to export Irish greyhounds to Asia with the tacit consent of the industry and the government.

What kind of coercive power would an internal industry rule have without an appropriate law that would properly penalise the exportation of greyhounds to some countries? Are the GBGB and the IGB intending to propose a law that would punish with jail time those who export dogs to China and Pakistan?

And would the British and Irish governments be prepared to take on the responsibility for such a ban, which would have profound repercussions on commercial as well as foreign policy? And how would such a ban be achieved, in real terms? With a list of forbidden countries? Who could stop greyhound owners from exporting dogs to ‘permitted’ countries, and then sending them on from there to ‘forbidden’ ones? Who is going to establish which countries are ok and which aren’t?

Pakistan for example does have animal welfare laws, but unfortunately they date back to colonial times and nobody applies them. In Spain too there is welfare legislation, but it is often not applied.

In a nutshell, the whole thing is a smokescreen. Furthermore, it is pointless on a practical level to hold talks about exports without involving the IGB and the Irish government, given that most of the exported dogs come from Ireland.

It is for all of these reasons, among others, that we have always clearly stated that ending greyhound racing is the only thing that will end exports4.


The GBGB’s focus on the problem of exports also has another aim however, and that is to draw attention away from the real problem, which is not in China but in the UK (and in Ireland).

What is his answer to Greyt Exploitations, who have asked for a clear and public statement about the fate of the 7,661 greyhounds who left racing in 2017?6

Can the GBGB answer the question posed by the anti racing movement about what has happened to the 2,477 greyhounds who disappeared in 2017, of which there is no precise information in the official data?7

The GBGB have made a commitment to transparency with DEFRA (the UK’s Department of the Environment, Food and Rural Affairs)8 – so why will they not explain the reason why they will not publish the exportation data of the dogs exported abroad?

Discussing exports without a clear answer to these questions is just a waste of time and doesn’t address the heart of the matter, which is that the greyhound racing industry has no real interest in the welfare of the dogs.